EUR/USD: Can the pair reach parity?

Can it reach parity? If so, what is stopping it from moving below parity?

Can the pair reach 1.0000?  EUR/USD had been moving lower since May 2021, as concerns kicked in that the ECB wasn’t doing enough to help the European economy starve off high inflation.  Indeed, inflation continued to move higher over the next year to a recent high of 8.6% in May 2022, and the ECB has still yet to raise interest rates which are currently sitting at -0.50%.  However, at the last ECB meeting, the Committee said that it would raise rates by 25bps at the July meeting.  Some ECB members are arguing for 50bps.  But will it be too little, too late?  Two weeks ago, the theme switched from one of inflation fears to one of growth fears as the S&P Global Manufacturing PMIs were released.  In the Eurozone, many of the country’s individual results were weaker than expected, prompting fears that a recession may lie ahead.  The overall Euro Area PMI was 52.1 from June, down from 54.6 in May.  This may leave the ECB stuck between a rock and a hard place as it must decide whether to raise rates during a period of surging inflation or leave them unchanged during a period of slowing growth!  The Euro Area releases May Retail Sales this week, with expectations of +0.4% vs -1.3% in April.

The US is having similar problems to those in the Euro Area, except the Fed is currently in a position of strength.  The Fed has raised rates from 0.25% to 1.75% over the last several meetings.  At the European Central Bank forum last week, Fed Chairman Powell said that although it may be painful, and may even crash growth, bringing down inflation must be done quickly to prevent rapid price growth from becoming entrenched. At the upcoming FOMC meeting in July, the decision is whether to raise rates by 50bps or 75bps.  This could potentially bring rates to 2.50%, whereas the ECB could be sitting at -0.25%. A growth slowdown is on the tips of everyone’s tongues in the US as well, however with interest rates at current levels, the US Dollar is screaming vs other currencies. The US Dollar recently traded to its highest level since December 2002 near 106.75.  The main reason the Fed can raise rates as quickly as it does, is due to the low Unemployment Rate that the US currently enjoys, at 3.6%.  This week, the US will release Non-Farm Payrolls for June.  The expectations are for the US to have added 268,000 jobs to the economy last month vs +390,000 in May.  The Unemployment Rate is expected to remain unchanged at 3.6%.  Powell has stated before that getting inflation down may come at the expense of the Unemployment Rate.  This reading will be closely monitored by the markets and the Fed! 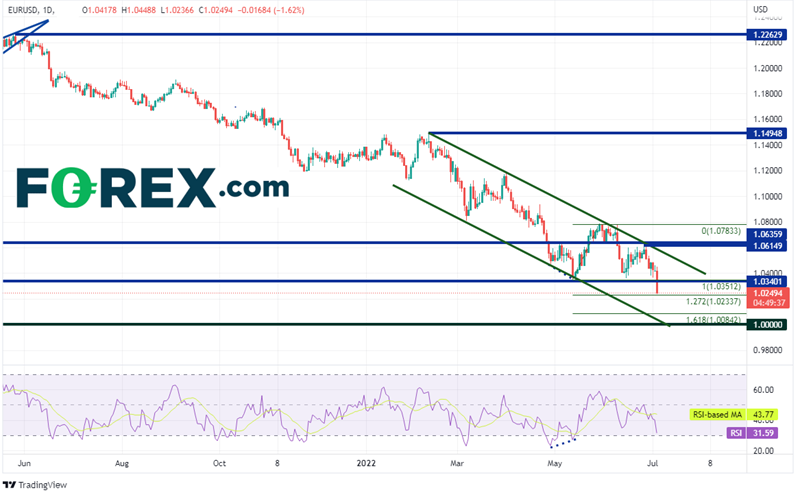 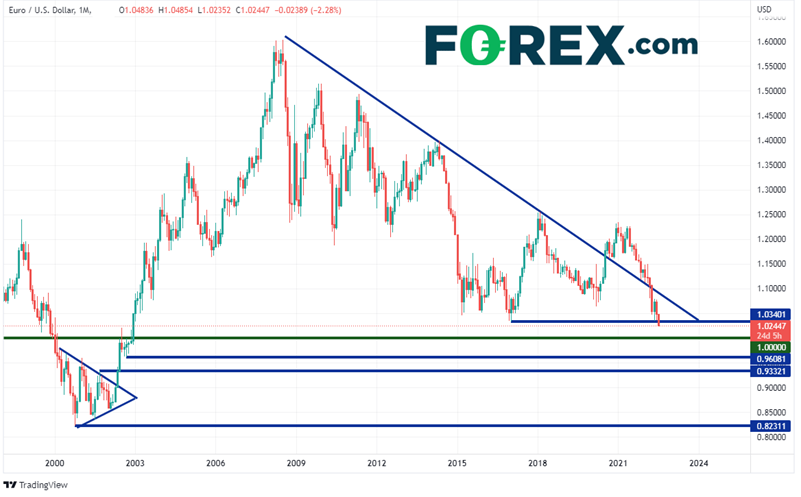 EUR/USD has been on the move lower for over 1 year now.  Can it reach parity?  If so, what is stopping it from moving below parity?  Given that the US currently enjoys of a low Unemployment Rate, the pressure will be on the ECB to not only bring rates positive, but also to keep the economy from entering a recession.