EUR/USD at the Mercy of Brexit and Shutdown Headlines

As a recent Bloomberg article noted however, “Shutdowns don’t get bad linearly. They get bad exponentially.” It’s easy to imagine a future scenario where mass strikes of so-called “essential personnel” such as air traffic controllers takes a big bite of economic growth and by extension, US market performance. For now though, traders are mostly ignoring the (lack of) developments out of Washington and focusing on global economic / political developments.

Of course, there’s no bigger political story right now than Brexit, where the pound made a nearly 200-pip round trip yesterday as PM May’s Brexit bill suffered an historic defeat in Parliament. Interestingly, we saw a similar, if more subdued, move in the euro. EUR/USD dropped shed a quick 50 pips in the lead-up to the vote before bouncing back to stabilize around the 1.1400 handle since.

Taking a step back, EUR/USD has dropped back into the middle of its November-December range. The pair has formed a near-term bearish channel over the last week, but that downdraft is now approaching a rising support line connecting the three most prominent recent lows in the 1.1330 area. With little in the way of either US or European data scheduled for release this week, the pair may continue to whipsaw in concert with Brexit developments, as well as any headlines surrounding the US government shutdown. Day traders may consider trading around the near-term technical structures, but for swing or longer-term traders, the most prudent course to take toward EUR/USD may be to stand aside and wait for a clearer setup to form. 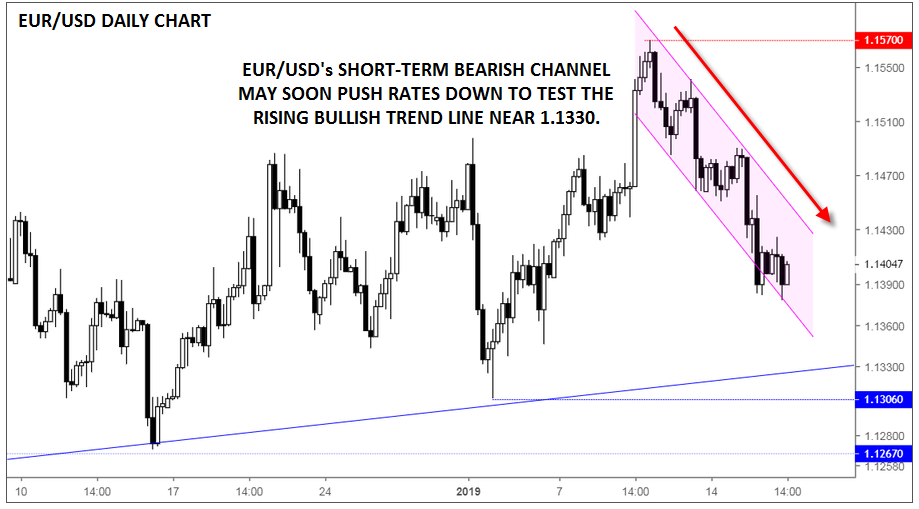