The EUR/USD is breaking down as the dollar upsurge continues as the euro is coming under increased pressure because of Italy's heightened political uncertainty and recent soft patch in Eurozone data.

The EUR/USD is breaking down as the dollar upsurge continues. This follows buck-denominated gold's meltdown from the day before. The metal remains under pressure amid an appreciating US dollar and rising bond yields. Although yields are slightly weaker today, they remain well supported in the US, especially the short-dated ones, as investors continue to expect there to be at least two more rate increases from the Fed this year. Consequently, the Dollar Index is finding itself at its best level since December. Correspondingly, the EUR/USD pair is at its weakest since the end of last year.

The euro meanwhile is coming under increased pressure because of Italy's heightened political uncertainty, and recent soft patch in Eurozone data. Reports that the Five Star Movement and the League, which are in talks to form a coalition government, are considering a debt relief from ECB to the tune of €250 billion has stoked fears over Italy’s creditworthiness.  Italy's FTSE MIB has fallen sharply as a result, as too have the euro, and despite an otherwise bullish day for European stocks. Not only was the EUR/USD down but the EUR/JPY, EUR/CHF and EUR/GBP were all weaker at the time of this writing.

Meanwhile the consistent weakness in German data in the first three months of the year meant that the economy expand by a modest 0.3% on the quarter, which was weaker than expected, as we found out yesterday. The Eurozone as a whole likewise saw its GDP grow by modestly by 0.4% in the first quarter, which was in line with the expectations. The Euro area’s CPI measure of inflation meanwhile was confirmed today by Eurostat at 1.2% for April year-over-year. With growth and inflation both weak, and Italy’s political uncertainty at the forefront, the ECB will be in no rush to normalise its monetary policy. This should keep the euro under pressure, or at best keep its gains in check, in the months ahead.

The EUR/USD’s failure to reclaim the broken 1.20 handle at the start of the week meant that rates remained below the now flattening 200-day average, keeping the short-term bearish momentum intact. The world’s most heavily-traded pair has now broken its previous support around 1.1820/50, a range which is now going to be the first key resistance zone to watch. If the weakness persists, the EUR/USD could drop to test the 1.17 handle next. Around this level, we have the 38.2% long-term Fibonacci retracement coming in at 1.1710 while a prior support and resistance level is seen at 1.1680. We think that the oversold EUR/USD may stage at least a short-term bounce from this 1.1680-1.1710 area, should we get there. For this bounce to happen we ideally want to see a sudden sharp down move to this support area rather than a slow grind, for if the latter were the case then a further breakdown would become likely.

As things stand we will turn cautiously bullish on the EUR/USD on the first sign of a bear trap; for example, if rates goes back above the broken 1.1820/50 support area again. But a clear bullish development would be if a prior high was taken, in this case 1.20. 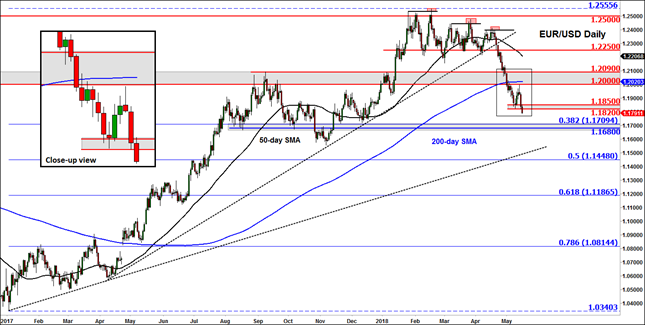