The single currency is partly lower because of the drop in the EUR/USD exchange rate as the dollar firms up across the board thanks to short covering and positive surprise in US data.

From being one of the strongest to one of the weakest currencies in space of two days. That’s right, the euro is actually falling for once. The single currency is partly lower because of the drop in the EUR/USD exchange rate as the dollar firms up across the board thanks to short covering and positive surprise in US data. But with some euro crosses like the EUR/GBP also being lower, this suggests there’s actual internal weakness in the currency. However, this may simply be because of the fact that the EUR/USD has hit a massive area of resistance around 1.20 this week, rather than weakness in Eurozone data. After all, there hasn’t been any significant Eurozone data released today. If anything Spanish and German CPI measures of inflation were more or less in line with the expectations.

It is worth remembering that after a significant appreciation of the EUR/USD exchange rate, many buyers have been happy to take profit around the 1.20 handle, as the sellers are having one more attempt to push the currency pair lower. This time there may be a good reason for them to do us: most of the negativity may be priced in for the dollar. What’s more, today’s release of US macro pointers were stronger than expected. US second quarter GDP came in at 3.0% quarter-over-quarter in an annualized format versus 2.7% expected and 2.6% in the initial estimate. Earlier in the day saw the August ADP employment report print 237,000 compared to 185,000 expected, while the July reading was revised higher from 178,000 to 201,000. It is now all down to Friday’s official nonfarm payrolls report. If this also shows further strength in the labour market and another rise in wages then calls for a December rate rise may increase, triggering further dollar buying interest. Conversely, a very weak jobs report may have the opposite effect.

Regardless of the fundamentals, the chart of the EUR/USD is painting a bearish picture at the moment. The world’s most heavily traded pair has hit a band of resistance around the psychological 1.20 area, including the July 2012 prior support, now resistance, at 1.2040/45 area . So far one can only treat this as a short-term pullback inside what still is a long-term upward trend. After all, we haven’t had a break in market structure of higher highs and higher lows yet. However, if the EUR/USD breaks below the initial support area of 1.1880-1.1905 (old resistance) then we may see an accelerated drop below that region and into the next support at 1.1815/17 level – this being the last resistance pre last week’s breakout. Below Friday’s candle at 1.1775, the bias would turn decidedly bearish. And if the EUR/USD eventually breaks below the last swing low at 1.1160/65 level then we will have our first lower low.

So, things don’t look too great for the EUR/USD at the moment, mainly because of the dollar’s widespread recovery. However, the sellers have a lot of wood to chop as key support levels are being tested. Friday’s US jobs report could complicate the EUR/USD’s outlook in the event of disappointment. 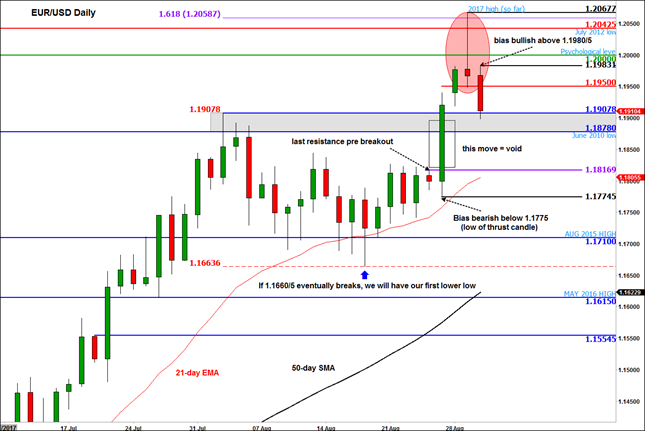