EUR/USD edgy ahead of French elections

The EUR/USD formed a key reversal pattern on its daily chart yesterday, namely a doji candlestick pattern at key resistance around the 1.0775 area. As well as this being an old support level, the 61.8% Fibonacci retracement against this year’s high also converged here. This morning, the low from Thursday’s reversal candlestick pattern has broken down, and we are seeing some follow-through in the selling pressure. The old support level at 1.0735 turned into resistance earlier and this is where today’s high (so far) has been formed. Looking ahead, the next support is not that far off now at 1.0670. This level was previously resistance and so we may get a bounce upon a potential retest.

Generally speaking though, the EUR/USD continues to trade inside an ugly range. My longer-term outlook on the EUR/USD is neutral for now but will turn decidedly bearish if and when that old support area of 1.0460-1.0525 breaks down. Until and unless that happens, there is always the possibility for sharp short-squeeze bounces as we have seen throughout Q1. 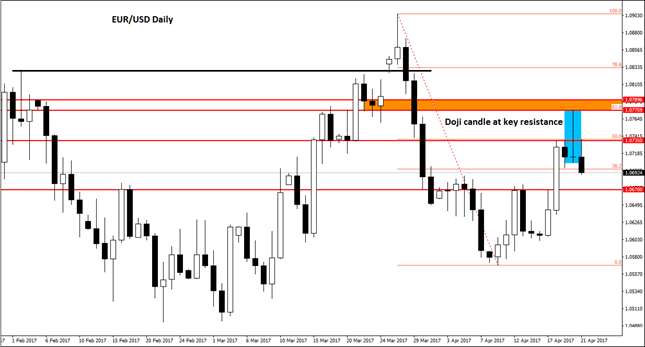