The recent developments have been especially negative for the euro, as the crisis in Italy appears to be escalating. This is reflected in the widening of the yield spread between Italy and Germany.

The dollar’s bullish trend has been gaining traction in what has so far been a quiet week data-wise. It has risen against all major currencies in recent trade except the Japanese yen, with the latter finding support from safe haven flows. The focus remains firmly on government bond prices after their recent sell-off which caused yields to rise across the board, leading to a sell-off for stocks and noninterest-bearing assets like gold.

The developments have been especially negative for the euro, as the crisis in Italy appears to be escalating. This is reflected in the widening of the yield spread between Italy and Germany. The spread has widened to over 311 basis points for the first time in more than 5 years.  It comes after the Italian government submitted a budget draft for 2019 last week, which provides for a significantly higher deficit than had been expected.

The single currency has not been helped by this week’s data releases from the Eurozone. On Monday, for example, we found out that German industrial production unexpectedly fell 0.3% in August, rather than grow 0.4% as was expected. This marked the third consecutive month-over-month drop in German industrial production, with output declining by 1.3% in July and 0.7% in June. On top of this, a leading survey of European investors and analysts fell to its lowest level since June.

As a result of the dollar strength and euro weakness, the EUR/USD has broken and remained below the pivotal level of 1.1530 ahead of the upcoming inflation figures from the US on Wednesday (PPI) and Thursday (CPI). It appears as though the only thing that could save the EUR/USD would be the prospects of a significantly weaker US inflation figures, which look unlikely.  So, we may see further weakness in this pair over the next couple of days.

Like several other pairs, the technical path of least resistance is currently to the downside for the EUR/USD and it will remain that way while it holds below that pivotal 1.1530. At the time of writing, rates were dropping to another short-term support around the 1.1430 area, which is the point of origin of the last rally.  If this level were to give way as well then there isn’t a lot on the way until the prior low and long-term support around 1.1300 handle. Short-term resistance now comes in at 1.1460/65, the low from last week. We would turn modestly bullish on EUR/USD only if it reclaims 1.1530 on a daily closing basis or if rates show a distinct reversal pattern at lower levels first. 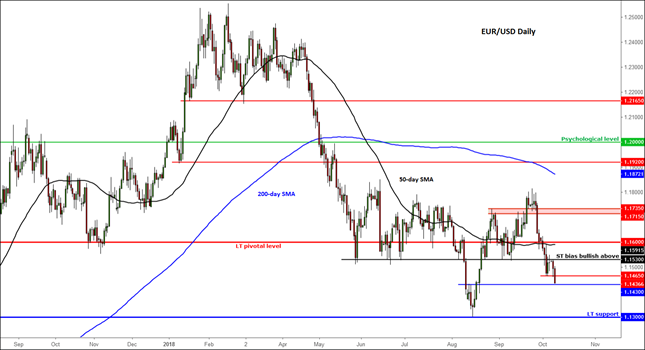