Another day, anther multi-year high for the dollar. This afternoon saw the EUR/USD drop below last week’s low to hit its lowest level since 2003. The world’s heaviest traded pair has been falling sharply in recent times as disparity between Eurozone and US monetary policies grow.

Another day, anther multi-year high for the dollar. This afternoon saw the EUR/USD drop below last week’s low to hit its lowest level since 2003. The world’s heaviest traded pair has been falling sharply in recent times as disparity between Eurozone and US monetary policies grow. Whereas the ECB has turned even more dovish by expanding its QE stimulus programme to at least December 2017, the Fed has cut interest rates and has talked up the possibility of three further hikes next year. This is basically the driving force behind the EUR/USD’s downward move and will probably remain so in the early parts of next year.

As we and many other analysts had expected, the EUR/USD ended last week below the March 2015 low of 1.0460. This basically signalled from a technical standpoint that the long-term downward trend has resumed after almost two years of consolidation. During this period, the EUR/USD managed to climb to as high as 1.1715, but often it faltered around the 1.1500 area. To put this into perspective, it did not even retrace to the shallow 38.2% Fibonacci level against the drop from May 2015 high of nearly 1.4000.

Thus, that lengthy consolidation and a relatively shallow pullback means this next phase of the move could be severe in terms of magnitude. At a minimum, the EUR/USD, I think, would reach parity, possibly before the year is out. I think there is potential for it to drop even lower over time.

Before it potentially reaches parity tough, there are levels where we may see intermediate support around. Among other things, these include the Fibonacci extension levels from the prior upswings as shown on the chart. The first is the 161.8% extension level of the most recent upswing that occurred before the ECB meeting, at just below 1.0280. The 200% extension of the same swing comes in at 1.0140 which is not too far off the 127.2% extension of the entire 22-month prior range, at just above 1.0120.

Our bearish view on the EUR/USD would become invalid if it rallies back above the 1.05 handle and holds there. Until and unless it does that, the path of least resistance is to the downside. 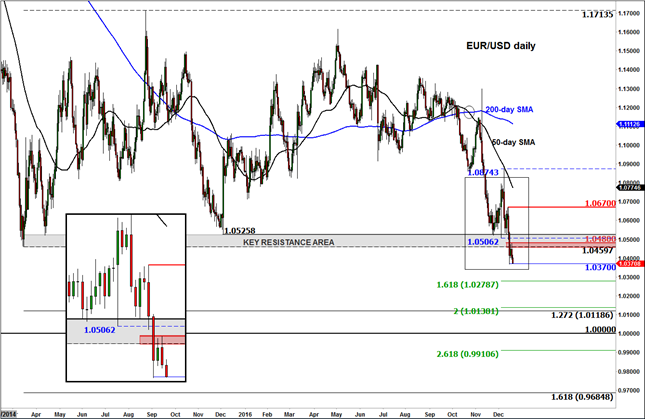