After rising for six straight months, the EUR/USD looks set to end September lower, barring an unexpectedly sharp rally at the end of this week. Part of the reason for its sluggish performance can be explained away by a rebounding US dollar, which has recently found support on renewed hawkishness from the Federal Reserve. From the Eurozone, political uncertainty and disappointment that the European Central Bank has so far refused to taper QE despite an improving Eurozone economy has also weighed on the euro. The ECB has also recently attempted to talk down the single currency, which has arguably worked so far. Last week's German elections saw Angela Merkel's party win the largest share of the votes but fell short of forming a majority government. They won fewer votes than expected while the far right and Eurosceptic AfD secured a much larger portion of the vote than expected. This led to concerns that AfD will now have a voice in the German parliament and weaken Merkel's power. Meanwhile in Spain, Catalonia’s regional government intends to hold an independence referendum on Sunday. However it is unclear if it will go ahead as the Spanish government has promised to stop the vote, which it says is unconstitutional. But if the vote goes ahead then this may create further uncertainty in the region and could be euro-negative.

From a technical standpoint, the EUR/USD's next move will depend on bullish market participants' ability or otherwise to defend their ground circa 1.1700/20 area. As can be seen from the long term chart, below, this level was the top of the prior 2.5-year-old trading range. Given the amount of time price had spent here previously and the fact that the breakdown attempt below the range and towards parity failed at the start of the year, there is no doubt that the long term trend has turned bullish, despite this month's bearish price action. However, if the EUR/USD were to break below this 1.1700/20 area decisively, then it will go back inside the prior range and as such render the recent breakout as a false move. Only then will the bears have reason to celebrate and consequently we may see further follow up technical selling as we head into the final quarter of 2017. But for the time being, the bulls still technically remain in control even if they have lost some ground over the past month or so. We are now on the lookout for bullish signs to emerge again on the lower time frame charts, ideally around the 1.1700/20 area. At the same time, we will be quick to change our minds should support breakdown in a meaningful way here. 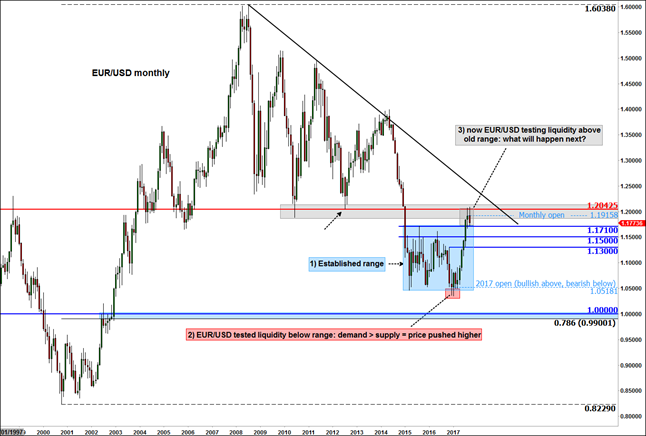