With stocks, pound and yen dominating the headlines in recent weeks, traders haven’t paid as much attention to what still is the world’s most heavily-traded FX pair: the EUR/USD. Given that the respective meetings of the Bank of Canada and Bank of England are scheduled for later today and tomorrow, the EUR/USD may not garner much attention during this period either. But then the focus turns to key US data at the end of this week and next week there will be some important macro pointers from the Eurozone, too, as well as the policy meeting from the European Central Bank. So, the EUR/USD should come under spotlight fairly soon.

In fact, Eurozone data released today was poor as industrial production showed a much larger than expected decline of 1.2% in May. However the EUR/USD traders chose to ignore this poor reading as the unit turned higher. But should the trend of weaker Eurozone data continue then this may be reflected in a weaker exchange rate soon – especially if US data turns positive now. The weekly US unemployment claims and PPI are scheduled for release on Thursday, while more importantly, the Consumer Price Index (CPI) measure of inflation will come out on Friday, along with the latest retail sales data and the closely-watched consumer sentiment index from the University of Michigan.

At the moment there is lots of noise around the 200-day moving average for the EUR/USD, and this indecision is reflected in the moving average remaining fairly flat for over the past 7/8 months. But price action continues to look bearish inside what effectively is a long-term consolidation pattern. Yesterday, for example, saw the EUR/USD form a bearish pin bar/doji candlestick pattern on its daily chart as the buyers’ latest attempt to break back above the 200-day MA was rejected. Both the 21-day exponential and 50-day simple MAs are pointing lower now, though they still remain above the 200 MA for the time being. What’s more, the EUR/USD recently broke through a long-term bullish trend line, the backside of which has since turned into resistance.

Taking everything into consideration, it appears as though the path of least resistance is to the downside for the EUR/USD. The bears would ideally like to see some follow-through in the selling pressure now. If seen and the next support at 1.10 breaks down, then June’s low at 1.0910/15 area could be revisited fairly quickly. Below this level, the next bearish target is at 1.0825/40 area which corresponds with the March low (when the ECB announced expansion in QE) and the 127.2% Fibonacci extension level of the bounce from June to this month’s high.

Meanwhile if the EUR/USD refuses to go down soon, then short-covering could aid a recovery, particularly if key resistance in the 1.1095-1.1135 area also breaks. In this potential scenario, a revisit of the broken bullish trend line and the 50-day moving average at around 1.1220-40 area would then become highly likely. 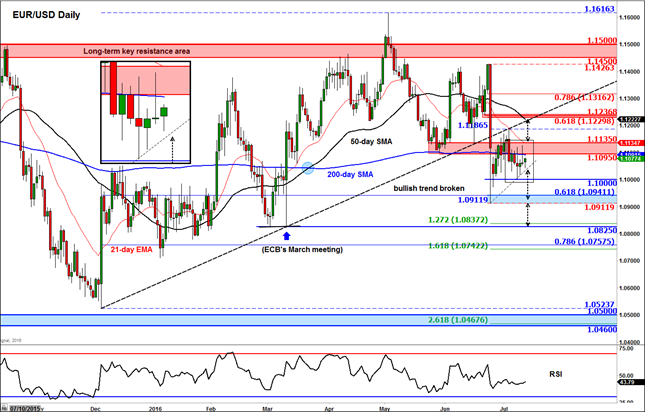