Things will kick off with the European Central Bank’s press conference, which is due to start shortly, while tomorrow we will have the Bank of Japan’s policy decision as well as the first quarter GDP estimates from both the UK and US.

Understandably, the markets were fairly quiet first thing this morning as investors looked ahead to a few potentially market moving events. Things will kick off with the European Central Bank’s press conference, which is due to start shortly, while tomorrow we will have the Bank of Japan’s policy decision as well as the first quarter GDP estimates from both the UK and US.

Earlier, the ECB published its latest rate statement and as expected it didn’t contain much in the way of new information. The markets hardly reacted, although the euro did weaken slightly against the dollar and especially the pound, which was already on the rise.

So, the focus is on the ECB President himself when he delivers the press conference at 13:30 BST.

Some analysts expect Mario Draghi to lean slightly towards a more dovish policy stance again given the recent weakness in Eurozone data, most notably in Germany. However, the ECB will not want to damage its reputation by backing down from its plans of starting the tapering process in September and end QE by December. So, Mario Draghi might dismiss the weakness in data as being temporary.

But should Draghi talk down Eurozone’s economic growth outlook or inflation forecasts, or otherwise hints at the prospects of delaying policy normalisation process, then the euro could drop sharply. Otherwise it could actually pop higher as bearish speculators who have been shorting the single currency ahead of the ECB decision are proven wrong. That being said, it is not as simple as that. There is also the possibility of “sell the rumour, buy the news” type of a trade. The EUR/USD has been going down on expectations of a dovish Mario Draghi, so if those expectations are merely met, would that warrant further selling?

On also needs to pay close attention to any comments regarding the euro. While the single currency has weakened in recent weeks against the dollar, this has been mainly due to a rebound in the greenback than the euro itself. If anything, the euro has actually remained elevated against most of her other rivals. Thus, if Mario Draghi were to talk down the euro then we may see a short-term drop and that could help to boost the European stock markets and possibly undermine gold as the dollar index finds further support through a potential drop in the EUR/USD exchange rate.

Ahead of the ECB’s presser, the EUR/USD was testing the previous swing low at 1.2155 at the time of this writing. If this level holds and price breaks today’s earlier high of 1.2190 then we would expect to see a short-squeeze rally towards 1.2250, possibly even the 1.2300-1.2330 range. These levels were formerly support. However if the EUR/USD breaks and holds below 1.2155 then we could see a drop towards the 1.20s next. Some potential support levels to watch in this scenario would be around 1.2090 – the 2017 high – followed by 1.2050 and the psychologically-important 1.20 handle itself, where we also have the 200-day moving average converging as well. 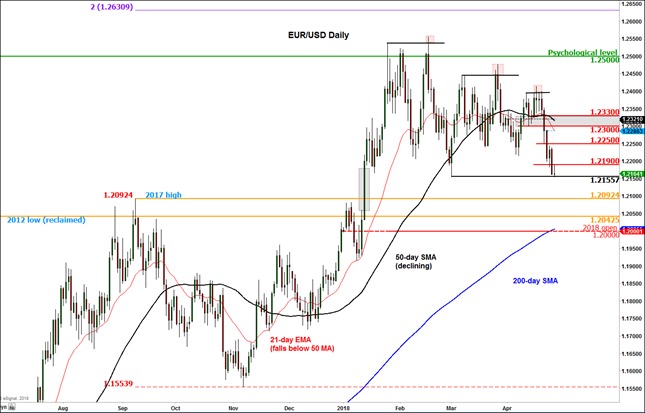