EUR/USD stars as dollar weakens ahead of US GDP

Despite recent weakness in Eurozone data, the EUR/USD has held its own relatively well with the single currency showing relative strength across the board today

Despite recent weakness in Eurozone data, the EUR/USD has held its own relatively well with the single currency showing relative strength across the board today. The likes of the EUR/GBP, EUR/JPY and EUR/AUD were all trading higher at the time of writing, suggesting today’s rally in the EUR/USD was not entirely due to renewed weakness in the dollar, following Fed Chairman Jay Powell’s slightly dovish remarks at his testimony yesterday.

US GDP in focus

For the EUR/USD to rise further we will need the greenback to weaken more over time. This could happen, for example, if incoming US data deteriorates, pushing future US rate hikes further out. As such, this afternoon’s “Advance” release of GDP estimate should not be taken lightly. This is expected to show the world’s largest economy expanded 2.2% in Q4 on an annualized format (that is, quarterly change x 4). In the previous quarter, GDP had grown 3.4% in the same format. If we see a much stronger print than 2.2% expected, then this could derail the EUR/USD’s rally. However, a disappointment could send rates towards an possibly beyond 1.15 today.

Looking ahead, we will have a speech by Fed’s Powell as well as a cluster of data including Core PCE Price Index, Personal Spending and ISM manufacturing PMI to look forward to tomorrow. Friday will also see the release of Eurozone CPI and the latest Purchasing Managers’ Index (PMI) numbers from Spain and Italy, while we will have the revised PMI data from France, Germany and Eurozone as well.  Earlier today, we had CPI data from Italy, Spain and France, which were mixed with the latter disappointing. However, France made up for it by delivering a solid 1.2% monthly rise in retail sales. German CPI will be released later on today.

EUR/USD bulls still in need of a higher high

From a technical point of view, the EUR/USD’s dogged determination to refuse to go below last year’s low at 1.1216 is impressive but it might be a bit early for bulls to celebrate yet. Since hitting that low in November, the bears have endured several unsuccessful attempts to push prices further lower. Yet, there hasn’t been any great deal of urgency from the bulls either. That could change, however, if and when price creates a higher high above the most recent peak at 1.1515. If it were to go above this level, the EUR/USD will have taken out a bearish trend line and the 200 moving average in the process. At that point, we will turn objectively bullish on the EUR/USD. 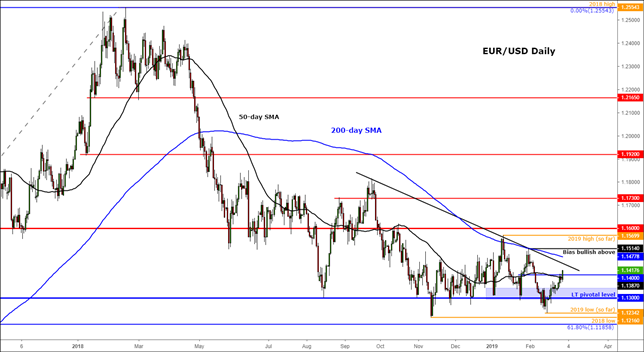