Fed Guides Traders to Expect No Change in Rates Through December… 2020!

With little in the way of top-tier economic data on tap and earnings season winding down, traders have turned their attention to today’s busy Fedspeak calendar.

None of the central bankers speaking today have “rocked the boat” when it comes to monetary policy…and that’s a very notable development in itself! It seems that both the FOMC’s doves and hawks are comfortable with interest rates where they are, leaving little impetus for the central bank to make any changes unless or until we see a sustained, substantial shift in underlying economic data:

With all of today’s major Fed speakers singing from the same neutral hymn sheet, traders have essentially priced out the risk of any change in interest rates this year, with the CME’s FedWatch tool showing a 96% chance of no change to interest rates in the Fed’s December meeting (the remaining 4% implied odds are for a 25bps cut). Looking further out, traders are pricing in a 45% chance of interest rates remaining in the same 1.50-1.75% range at the end of 2020, with roughly 44% odds of at least one rate cut and 11% odds of a single rate hike by then. In other words, recent comments from the Fed have essentially “reset the table” to neutral, exactly where the central bank wants to be heading into an election year. 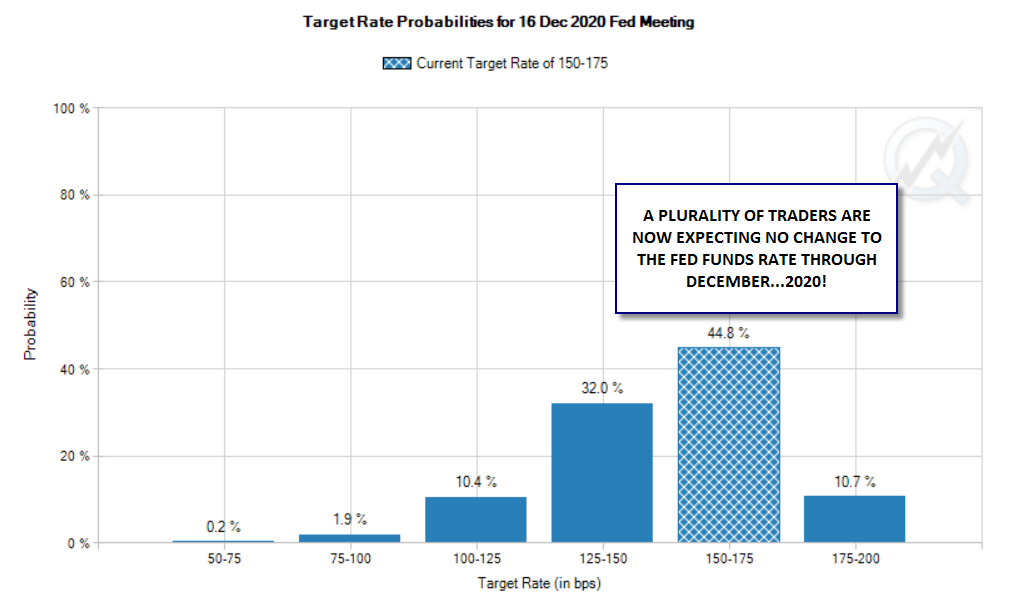 Of course, there are enough unknowns between the election, trade policy, geopolitical developments, and economic data that the Fed will likely have to tweak policy over the next 13 months, but at this point, traders see the risks as balanced in both directions. We’ll be keeping a close eye on all of these developments as we flip the calendars to 2020, when Fed policy will once again be a major driver for markets.