We would be shocked if the communication-era Fed failed to cut rates.

Despite growing pressure from President Trump, the market-implied odds of a 50bps double rate cut at today’s Federal Reserve meeting have fallen to essentially 0%. In fact, a single 25bps interest rate cut is “only” 95% priced in according to data from Bloomberg, though we would be shocked if the communication-era Fed failed to cut rates after regularly hinting at such a move for weeks.

As the graphic below shows, inflation (Core PCE) remains stubbornly below the central bank’s 2.0% target, even while the unemployment rate sits at a half-century low. Meanwhile, the current trade war “ceasefire” between the US and China has put one of the global economy’s biggest potential stumbling blocks on hold for the moment: 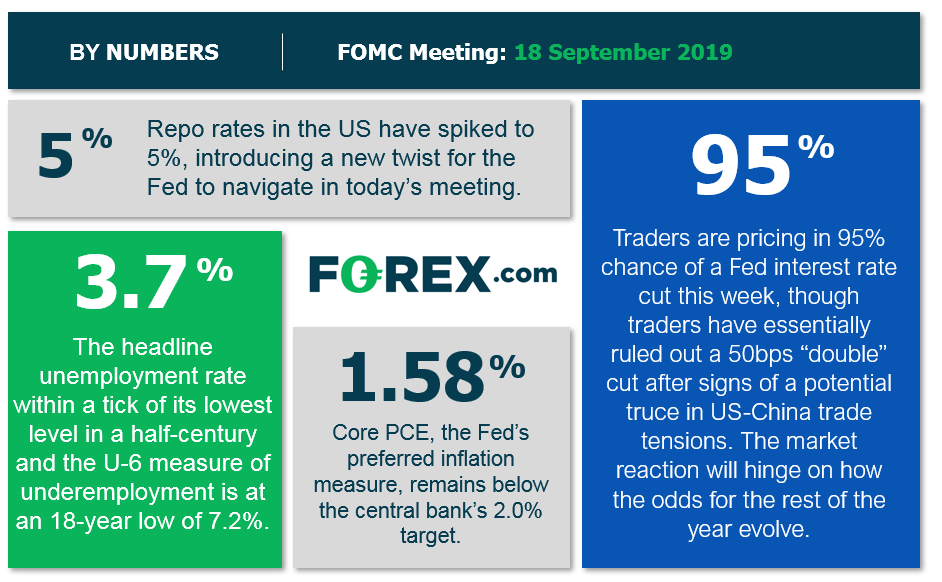 Beyond the “decision” about interest rates, recent developments in the money market sector have made this Fed meeting interesting. Over the last week, the interest rate on repos, a key short-term funding mechanism for banks, have surged. In response, the Federal Reserve has reintroduced its own repo facility, essentially injecting money into the banking sector. While most analysts believe the situation is due to a transitory confluence of one-off factors, we expect Chairman Powell to field multiple questions about the repo market in his post-decision press conference. At the margin, these issues may increase the likelihood of a tweak to the IOER, or interest on excess reserves, paid to banks to encourage more lending, or a standing repo facility, which would be viewed as slightly dovish developments.

With a 25bps cut widely expected, the decision on interest rates is unlikely to be a big market mover in and of itself. Instead, stock and dollar traders will be keeping a closer eye on the central bank’s outlook for rates and the economy moving forward.

If Chairman Powell and company cut their forecasts for interest rates (the infamous “dot plot”) and/or inflation for the coming years, traders will view that as a “green light” to anticipate more than a “mid-course correction” to interest rates. In that case, we could see the dollar fall and US indices rise.

On the other hand, a more optimistic outlook that downplays the potential for an economic slowdown would prompt traders to trim their bets on further interest rate cuts from the central bank. In that case, the greenback could catch a bid, while US indices would likely pull back further from their record highs.