The Federal Open Market Committee issued its interest rate decision, monetary policy statement, and economic projections, followed by a closely-watched press conference on Wednesday afternoon. As widely expected, the target range for the Fed Funds rate remained unchanged at 1.00%-1.25%. However, aspects of the release, including the statement, dot plot, and economic projections, leaned distinctly towards a more hawkish stance, easing pressure on the US dollar and intensifying pressure on gold.

The Federal Open Market Committee issued its interest rate decision, monetary policy statement, and economic projections, followed by a closely-watched press conference on Wednesday afternoon. As widely expected, the target range for the Fed Funds rate remained unchanged at 1.00%-1.25%. However, aspects of the release, including the statement, dot plot, and economic projections, leaned distinctly towards a more hawkish stance, easing pressure on the US dollar and intensifying pressure on gold.

While there was little in the way of any substantive changes to the new statement from the last one – besides a cursory mention of recent hurricanes and their expectedly limited effect on the national economy and inflation – the Fed decidedly stated that “in October, the Committee will initiate the balance sheet normalization program.” This concrete, and expected, move in the direction of policy tightening was accompanied by a dot plot forecast that remained firmly hawkish on the pace of interest rate increases going forward. Both the decision to keep interest rates unchanged on Wednesday and to begin balance sheet reduction in October were unanimously approved by the committee.

The Fed’s economic projections were somewhat mixed. Most notably, the forecast for economic growth this year increased from 2.1% GDP previously to 2.2%. But one aspect of the Fed’s projections did skew to the dovish side – the inflation outlook was lowered for both this year (1.7% down to 1.5%) and next year (2.0% down to 1.9%). However, despite these reduced projections for inflation, the Fed’s outlook for interest rates remained mostly as robust as they had previously been, defying some assessments that the Fed had become increasingly dovish.

The new dot plot projections (as displayed on the accompanying chart) showed that the median forecasts for interest rates were little changed from the last one issued in June. This time, eleven out of sixteen participants saw a third rate hike to occur in December, and the median projection for 2018 remained steady at three rate hikes throughout the year. There was less consensus beyond next year, but the median forecasts for the end of 2017 and through 2018 were rather clear and remained largely hawkish.

The Fed also provided a clear plan for a systematic reduction in its bond purchases. $10 billion will be rolled off initially in October, followed by quarterly $10 billion increases in the roll-off until the total reaches $50 billion by the same time next year. These details surrounding the balance sheet reduction, along with the sustained push towards higher interest rates, helped provide more confidence that the Fed is on a clear path to policy tightening.

In the immediate aftermath of the Fed’s announcement, among the most salient market reactions were a sharp surge in the US dollar and an extended plunge for gold prices. Stocks initially sagged slightly on the specter of stimulus reduction and higher interest rates, but bank stocks were boosted on the rekindled outlook for a December rate hike. The sharp moves in the dollar and gold occurred as might have been expected given the market’s hawkish interpretation of the Fed’s current policy stance. Clarification of balance sheet normalization and renewed confirmation of a relatively brisk pace of interest rate increases are both signs that the Fed remains more hawkish than previously thought. Indeed, the market-viewed probability of a rate hike by December increased from under 60% prior to the FOMC statement release to over 70% in the aftermath of the release. This renewed Fed hawkishness could very well be the trigger that the heavily oversold dollar needs to rebound and begin a recovery from its recent long-term lows. 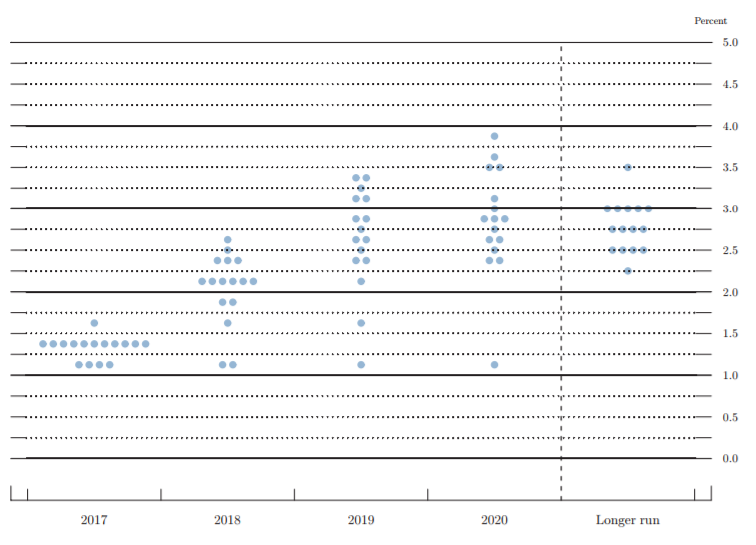