Okay, maybe not forget it totally as today’s focus has undoubtedly been on sterling on the back of this rising "Brexit" risks. The currency has been pounded today after the London mayor, Boris Johnson, threw his support behind the UK leaving EU, going head-to-head against PM David Cameron who supports the idea of Britain remaining in a reformed EU. The risk of the UK leaving the EU is still relatively small, but this could change in the coming months. Traders are not willing to take the risks and with the bears smelling the blood, the pound is getting crushed both from a fundamental perspective and momentum. At the time of this writing, the GBP/USD was dipping below 1.4150 and was closing in on January’s low of 1.4080.

Meanwhile, there have only been a handful of other developments so far today. Oil prices and (therefore) stocks have rallied. Equity investors have basically ignored the increased Brexit risks, as well as disappointing earnings from HSBC and weaker-than-expected Eurozone PMI data – the results of the latest Markit surveys shows that activity fell across the board in services, while manufacturing activity outside of France also declined in February. The markets are buoyed by the slightly firmer oil prices, weaker euro and expectations that central banks will keep rates at these record low or negative levels for the foreseeable future.

But for me, the most important FX pair to watch today is actually the EUR/USD, which could have wider implications on the financial markets. The world’s most heavily-traded pair was testing a major technical area at the time of this writing: 1.1050/60. This is where previous resistance meets the 200-day moving average and the 38.2% Fibonacci retracement level of the most recent rally. With the Euro-dollar already making a series of higher lows in recent times, there is a possibility for price to find good support here, leading to a potential rally later on in the day. The potential move could really accelerate if the buyers are able to also push the EUR/USD above short-term resistance at 1.1140.

All that being said, however, the weaker Eurozone PMI data combined with the slightly stronger-than-expected US CPI figures that were released on Friday suggests that there is also a good possibility for a breakdown. Indeed, with stocks rising and gold falling today, risk is back on the menu, which bodes ill for the EUR/USD. A failure to bounce at this key technical level would undoubtedly disappoint many bullish traders, potentially leading to further big falls in the days to come.

So in a nutshell, what the EUR/USD does around this 1.1050/60 area today could determine the direction for the next several days, and not just in the FX markets. 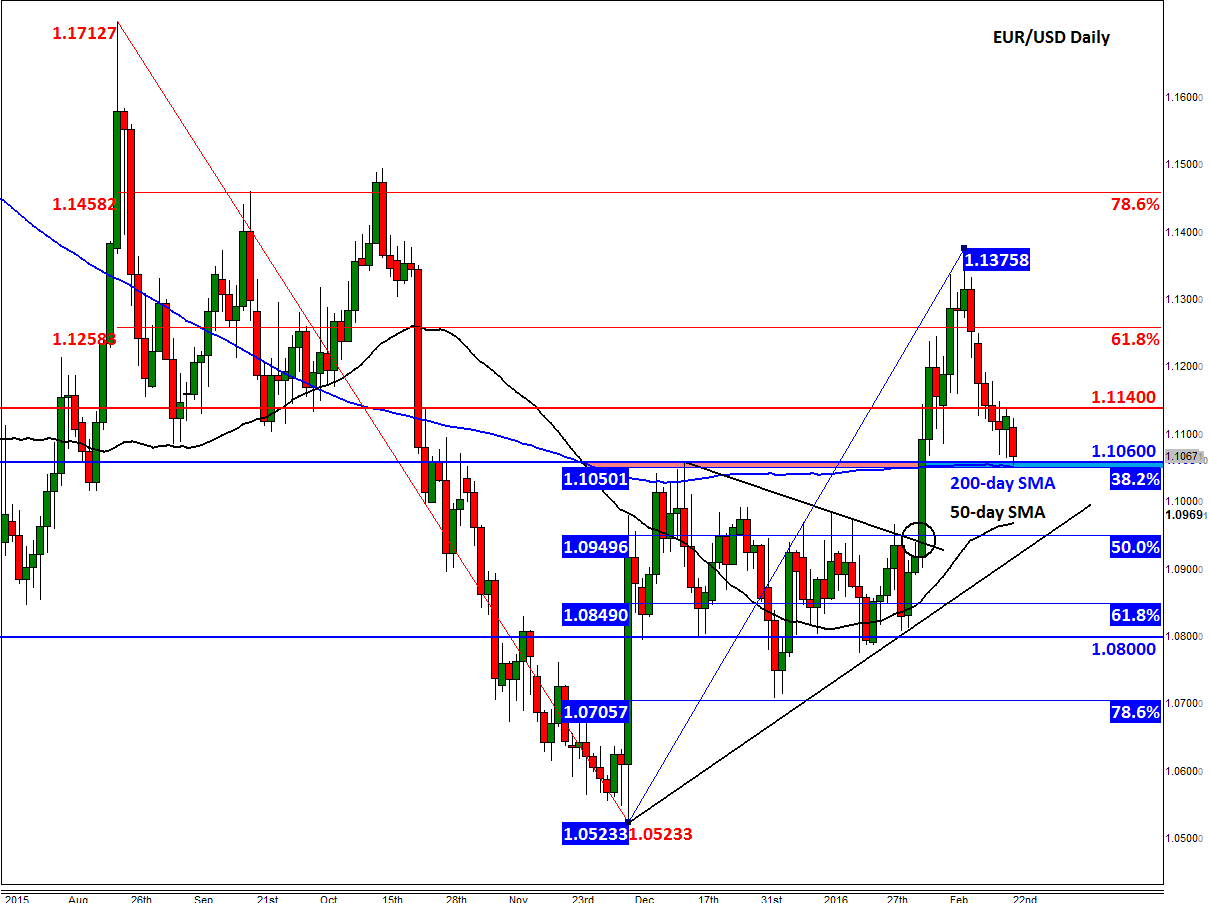