Investors have been dumping equities and other risky assets this morning ahead of the long weekend, although safe-haven gold has yet to shine as we go to press. This is in part because of the still-strong US dollar which has regained its poise after some hawkish commentary from the Federal Reserve. Once again oil has been the main culprit behind this latest sell-off in the equity markets after the official US crude stockpiles report showed inventories there continued to rise relentlessly for another week. Unsurprisingly, commodities are dominating the bottom of the FTSE 100 this morning, although Next is the biggest single loser after the UK fashion retailer cut its guidance and warned that it could be a "difficult" year ahead.

Though the markets look and feel quite bearish – with the major indices being down between 1 and 1.5 per cent – at this stage, traders would view this as a normal pullback rather than the start of a new downward trend. Oil prices could easily rebound while the reaction to the latest hawkish Fed remarks could simply be overstated.

That being said, the technical outlook will become more bearish if the indices go on to break further support levels. The daily chart of the FTSE, below, shows there has been little follow-up technical buying after the bearish trend line was eroded a couple of weeks ago. This is normally a bad sign. However, the lack of a significant move lower so far has helped to unwind the short-term momentum indicators from "overbought" levels through time rather than price action. This is a bullish sign. The last thing the bulls will want to see now is a closing break back below the broken trend line. Should this happen, more people will probably get discouraged from holding onto their long positions. The sellers will correspondingly grow more in confidence. The ideal situation for the bulls will be if the index bounces back strongly from the noted support area around 6040-6110, and then break above the recent range highs.

If the bulls win the battle here then they may aim for the 200-day moving average at just under 6255 as their next target, followed by the prior reference points at 6310 and 6440, as per the chart. However, should the sellers come out victorious in this bull-bear battle and the FTSE goes on to break below the aforementioned 6040-6110 support range, then there is little further reference points to watch until 5770, perhaps with the exception of the 50-day moving average at 5980. 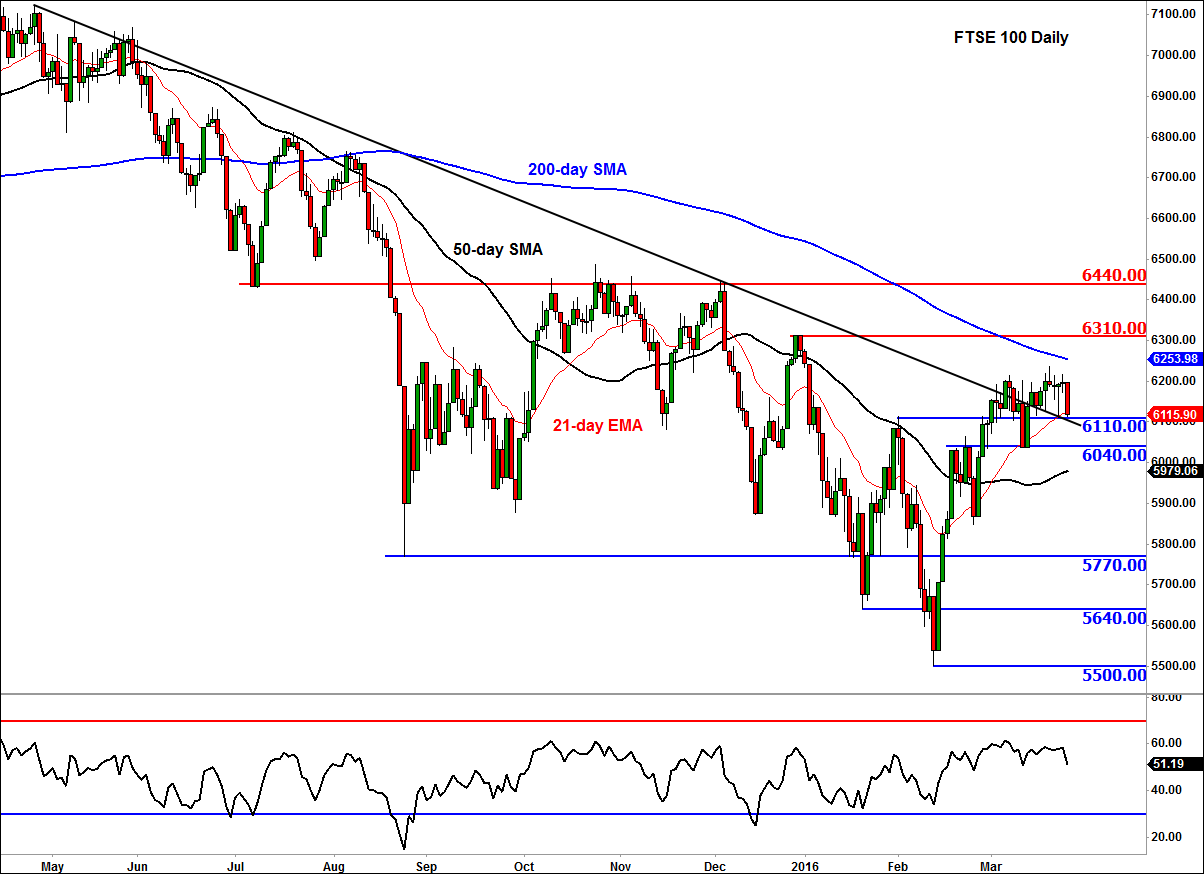