FTSE at key support with pound struggling amid Brexit uncertainty

The major equity indices in Europe started today’s session on the backfoot this morning.

The major equity indices in Europe started today’s session on the backfoot this morning. Was this perhaps because of fund managers rebalancing their portfolios? After all, Q3 ended with a bang for global indices. The S&P 500 recovered from a bad August to record its biggest year-to-date gain in more than 20 years. In Europe, too, the indices recovered to end Q3 noticeably higher. But with major central banks remaining in expansionary policy mode, and optimism rising that a US-China deal might be imminent, the stock market bulls are happy to keep buying every dip – for now, anyway. And we, too, continue to favour the bulls’ case rather than the bears’ in the short-term outlook even if the macro picture continues to deteriorate.

Today saw manufacturing PMIs from several economic regions fall further below the boom/bust level of 50, pointing to falling activity and underscoring the need for further monetary stimulus by major central banks. The Reserve Bank of Australia became the latest central bank to cut interest rates in this global easing phase. At 0.75%, the benchmark interest rate is at a record low in Down Under, with the RBA hinting that ore cuts could be on the way should the economy warrant it.

However, there was good news from the UK. Here, the PMI rose to 48.1 from 47.4 previously, beating analysts’ expectations. However, as my colleague Fiona Cincotta had envisaged, the gains for the pound was short-lived – in part because new orders and the employment components of the PMI data painted a grim picture. What’s more, with Brexit being just one month away, traders’ focus remained firmly on that rather than the economy. On that note, Boris Johnson is expected to submit formal proposals for an alternative to the Irish backstop on Wednesday. It remains to be seen whether the EU would accept it. The uncertainty is likely to keep the pound undermined, and paradoxically the FTSE underpinned. Remember the FTSE tends to react positively to a falling pound, given that the index is made up of large multi-national corporations whose foreign earnings will be boosted by a falling exchange rate.

From a technical point of view, traders may wish to watch the FTSE closely here, because (1) it has shown strong bullish signals of late and (2) it was testing a key support level at the time of writing. The UK benchmark index was probing support at around 7375, a level which had been resistance in the past. Recently, the index has been rising inside a bullish channel and found support on a number of occasions from its now-rising 200-day moving average. So, given the overall bullish characteristics of the FTSE, and with the benchmark indices in the US being so close to their record high levels, I think the UK index has a good chance to bounce here and resume higher. However, if the 7375 level breaks on a closing basis then that could see the index drop back to the support trend of the rising channel and the next key support around 7290 area again. 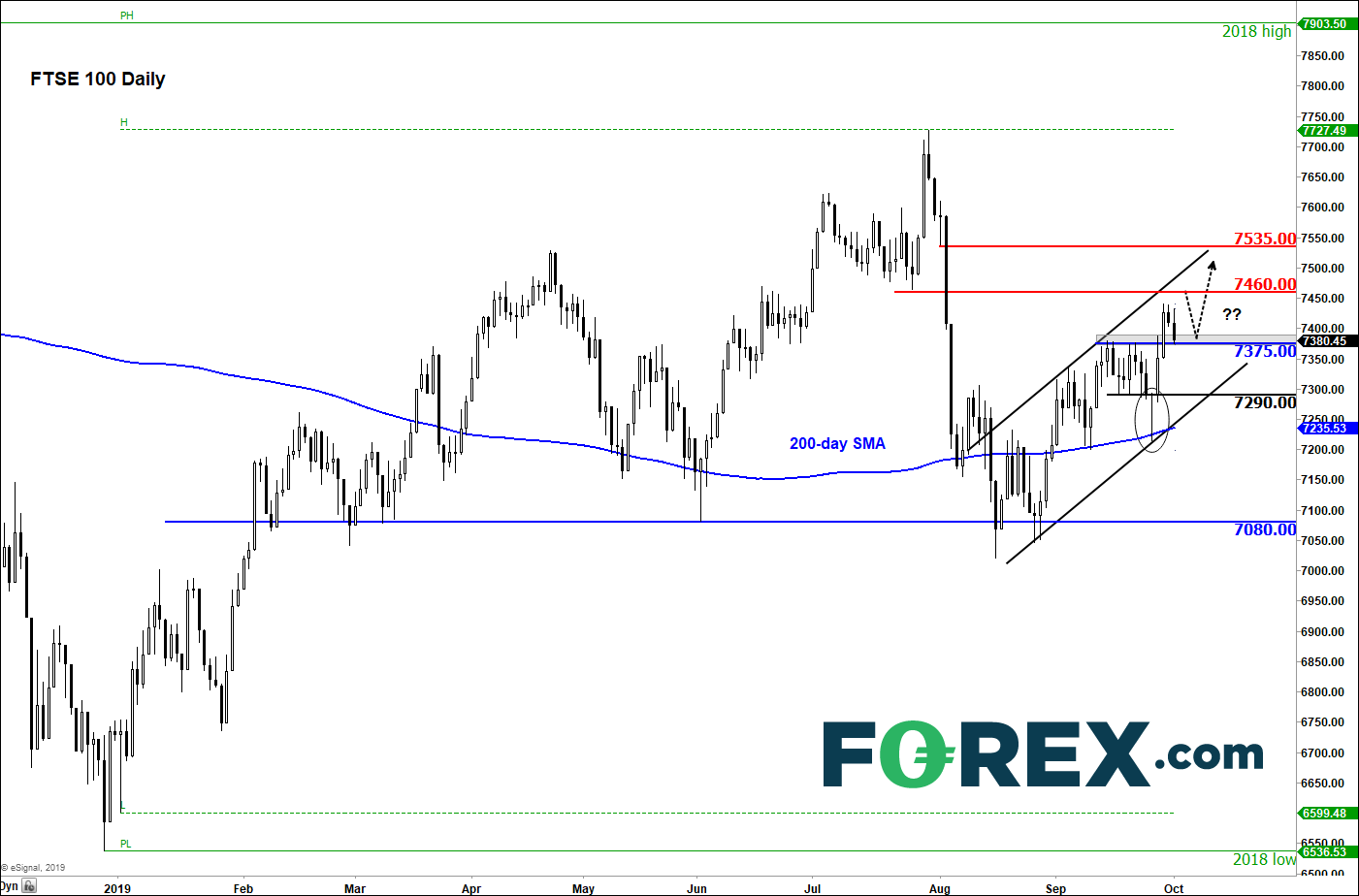