The BoE echoed the views of several other major banks which have provided similar views or even more dovish outlook on their respective monetary policies i.e. global interest rates will remain at or near record low levels for the foreseeable future.

Following the BoE’s policy announcement earlier, which was deemed to be more dovish than anticipated, the pound dropped and this helped to lift the FTSE to a fresh high for the week after the index had spent several days in consolidation. The BoE echoed the views of several other major banks which have provided similar views or even more dovish outlook on their respective monetary policies i.e. global interest rates will remain at or near record low levels for the foreseeable future. For that reason, equity indices continue to remain supported, keeping the bears at bay despite raised geopolitical tensions and concerns over global demand hurting company earnings.

Speaking of geopolitics, the FTSE was also supported by rising shares of oil majors which tracked crude prices higher. Raised geopolitical tensions continue to support oil prices at the moment, even if Saudi Arabia’s crude output could return to normal sooner than expected. But following Saturday’s attacks, investors have realised that production even in Saudi is at risk of outages due to rebel fighting or terrorist activity — something which looked almost impossible last week. This is why oil prices have been hesitant to quickly close their gaps created at the open this week.

As mentioned, the FTSE has moved to a new high for the week after breaking out of its consolidation. It is currently displaying a bullish engulfing candle on its daily chart, suggesting that the bears have been defeated after their attempt to move the index below the 200-day moving average, failed. With the bears apparently defeated, they may now move out of the way and consequently the index could accelerate to the upside over the coming days. Yesterday’s high at 7350 could be the key short term support to watch moving forward. Beyond last week’s high at 7375/80, the next major bullish objective is around 7455/70, an area which was previously support and where the 61.8% Fibonacci level converges. 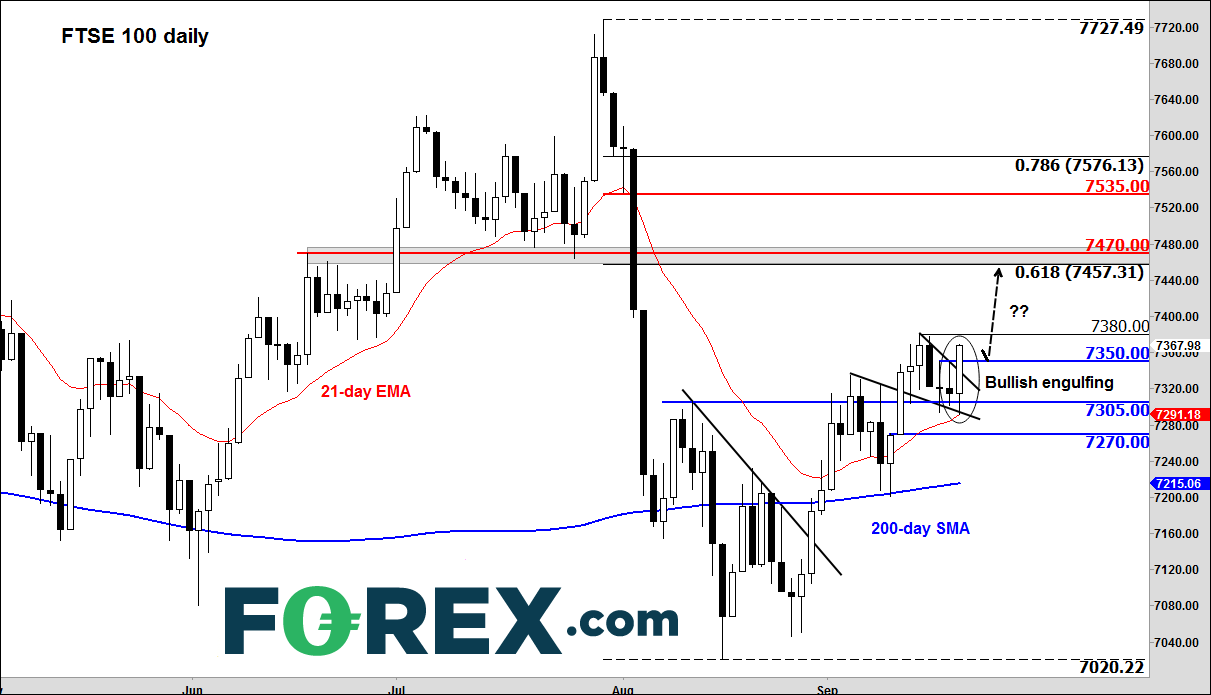