FTSE could be on its way to 8K

Risk remained on the table in the first half of European session. Safe haven gold and yen fell while stock indices pushed higher with the German DAX printing a new high for the week and reached its best level since early February.

Risk remained on the table in the first half of European session. Safe haven gold and yen fell while stock indices pushed higher with the German DAX printing a new high for the week and reached its best level since early February. European stocks found support from a weaker exchange rate and rallying oil prices. Not only has the EUR/USD dropped sharply in recent weeks, but so too have the GBP/USD and CHF/USD. These currency pairs have all dropped sharply because of the strength in the US dollar owing to the slumping government bond prices, which have helped to lift their yields to multi-year highs. Investors expect the rising oil prices to keep inflationary pressures high despite some signs of weakness in global economic data of late, most notably in Europe. Higher inflation usually means higher interest rates. Relative to Europe and Japan, data in the US has been better. As a result, the yield differential between the US and German bonds have risen, as too have the yield difference between US and Japanese debt. Correspondingly, the EUR/USD and GBP/USD have fallen and the USD/JPY has risen over the past few weeks as investors preferred the higher-yielding US dollar. The weaker exchange rates have helped to push the likes of the German DAX and UK’s FTSE higher, while in the US the major indices have been held back a little due to the firmer dollar.

A strong currency hurts exports and weighs on company earnings which are made abroad. Thus a weaker currency has the opposite impact, hence why European shares have outperformed their US counterparts over the past several weeks. The UK’s FTSE 100, which has several oil-related companies as its constituents, has benefitted additionally from higher oil prices. If crude prices remain elevated and/or the pound remains downbeat then this should provide continued support for the FTSE.

Technically, the FTSE looks poised for a bullish breakout as it hovers near the previous record of 7792/3. Its recent rally has lifted it above the yearly opening level of 7687, which has now turned into support. Thus, the market is showing willingness to hold in the positive territory for 2018, which is a positive sign given that it had risen for the past two years. Could it make it a hat-trick? In any case, we think that a breakout looks more likely than a big sell-off here, given the v-shaped recovery and the above fundamental considerations. If we do get a clean break above the previous all-time high then the FTSE’s next stop could very well be at the next big psychological level of 8,000. But in the event of a short-term pullback prior the breakout, there are plenty of broken resistance levels that could turn into support and thus provide a floor. Among them are 7570, 7435 and finally 7275. 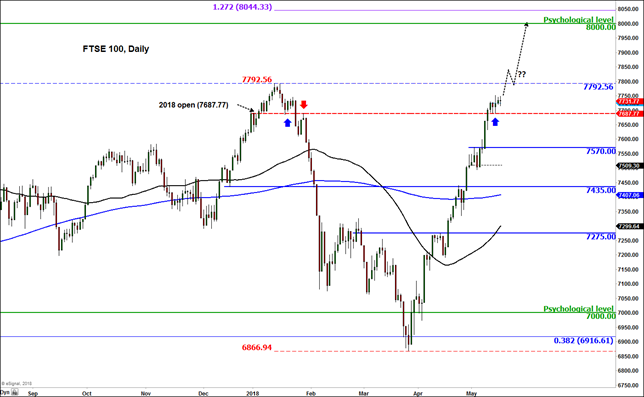