FTSE not out of the woods yet

The bigger the drop, the bigger the rebound. That is what has happened with the FTSE 100 index in the aftermath of the UK’s vote to leave the EU. In fact, the rebound has been so profound that the index has nearly made good all the losses suffered since the Brexit vote. Clearly, some investors who were lucky enough to come through the Brexit-stimulated drop relatively unscathed may now use this opportunity to either cut or reduce their stocks holdings or at least hedge their exposure by shorting the FTSE. This could especially be the case since we are approaching month-end; it would not look good on money managers who hold stocks in sectors that dropped massively post the Brexit vote. Added to this, bearish speculators who missed the original plunge may be tempted to step in and ride the next potential drop. So the FTSE could easily turn back lower.

However, to say we are surprised by the FTSE’s strength is an understatement. Clearly, some bullish investors must be thinking that the economic impact of Brexit is either overstated or that the new Prime Minister will not allow the UK to leave the EU. That being said, the Work and Pensions Secretary Stephen Crabb, who officially announced he is standing for the Conservative party leadership and to become the next PM, has promised to lead a government which would "deliver on the expectations" of the 17 million people who voted to leave even though he himself campaigned for Britain to remain in the EU. It would be interesting if some of the other potential successors of David Cameron will be in favour of holding a second referendum, which is something that Londoners and under 25s in particular will no doubt want to happen. This could further increase uncertainty, but ultimately support the markets on the hope people will change their minds – and votes.

What happens today will have a big say in terms of near-term direction, especially since the FTSE has arrived at a major technical resistance zone of around 6300. This area had been strong resistance in the past, while a bearish trend line also comes into play here. Thus, if the FTSE were able to hold onto its gains then this may give worried investors the confidence they need to return back to the markets, potentially leading to further big gains. In this potential scenario, the bulls may initially aim for the prior swing high at 6380 and then possibly the long-term 61.8% Fibonacci retracement level against the all-time high at 6500 next. However, if the FTSE is unable to hold onto this morning’s gains then a drop to at least the 6140-70 would then become likely, with this area being the meeting point of previous resistance and the 200-day moving average. If it then moves below 6140, this would be a very bearish outcome. 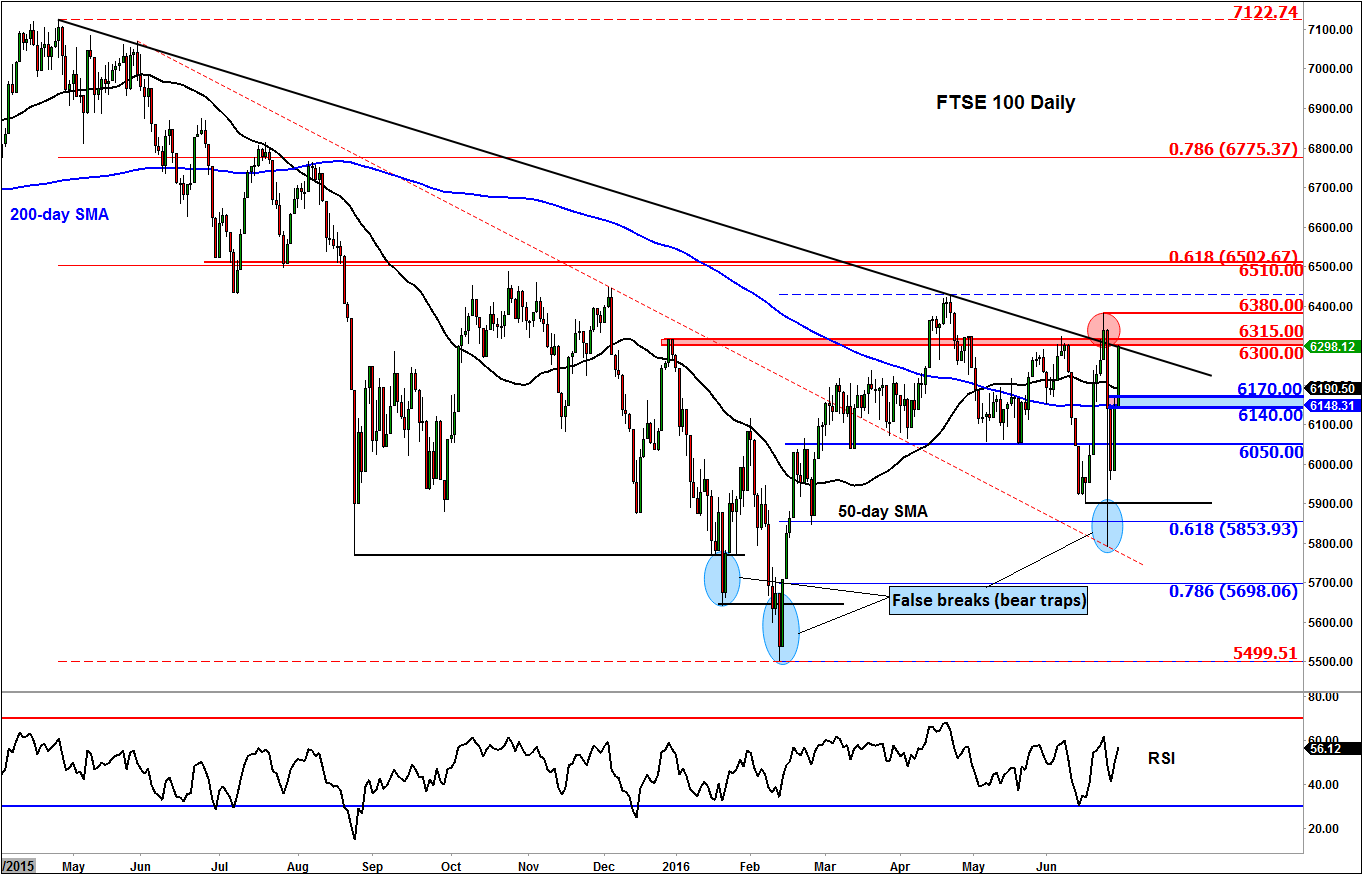