FTSE off lows as oil hovers around $30

European stock markets opened sharply lower this morning, before staging a recovery by mid-morning. Sentiment was once again hit by the falling price of oil, which dipped back below the pivotal $30 handle, and concerns over China, where equities dropped by another huge 6 per cent overnight. Investors are clearly worried about the prospects of a sharp slowdown at the world’s second largest economy and the corresponding capital outflows there. The lack of a significant follow-through in bullish momentum has also raised concerns that last week’s rally may have been just an oversold bounce. Likewise, crude’s inability to add to the gains from last week suggests that bullish investors didn’t really believe they had seen a bottom.

That being said, both stocks and crude oil prices formed large reversal-looking technical patterns on their charts last week, so undoubtedly some of the existing shorts may have used this morning sell-off as an opportunity to exit more of their positions, while those who had missed out on the rally, may have decided to step in after the latest retracement. This may help to explain why both crude and stocks climbed off their worst levels in mid-morning as no fresh news was released then. In fact, the economic calendar is looking rather empty today, so technical buying and selling could dominate the agenda for now, possibly until Apple releases its earnings results after the closing bell on Wall Street.

At the height of the sell-off last week, the FTSE fell for a time below its 2015 at 5765/70 as well as its long-term 38.2% Fibonacci retracement level of the entire upswing from 2009, at 5725. The selling pressure eventually ended at 5600, just ahead of the Fibonacci-based targets around point D of an ABCD move as shown on the chart. The FTSE then managed to climb back above its 2015 low in the second half of last week. As a result, the index was able to climb all the way back to around 5950 as the sellers rushed for the exits before the kick-back rally lost momentum. This morning saw the index again go for a test of the 2015 low (of 5765/70), before bouncing back. Clearly this is a very important level for traders and what happens here could provide a good clue about what to expect in the next several trading days.

If the buyers continue to hold their ground around the 2015 low of 5765/70 then there is a possibility for a rally towards, if not beyond, 6000, and potentially all the way back to the 50-day moving average at 6105 or the bearish trend line around 6200 over time. Conversely, if the 2015 low breaks down once more, then this would clear the way for the above-mentioned projected point D of an ABCD price pattern around 5570/80. Here, the 127.2% Fibonacci extension level of the bounce from August meets the 161.8% extension level of another swing (i.e. the BC move). But if we were to get to this target, I wouldn’t be surprised to see the FTSE eventually go even lower, say, towards the 5290-5325 area next. This is where the long-term 50% retracement level convergences with the 161.8% extension of the bounce from August (i.e. XA swing). 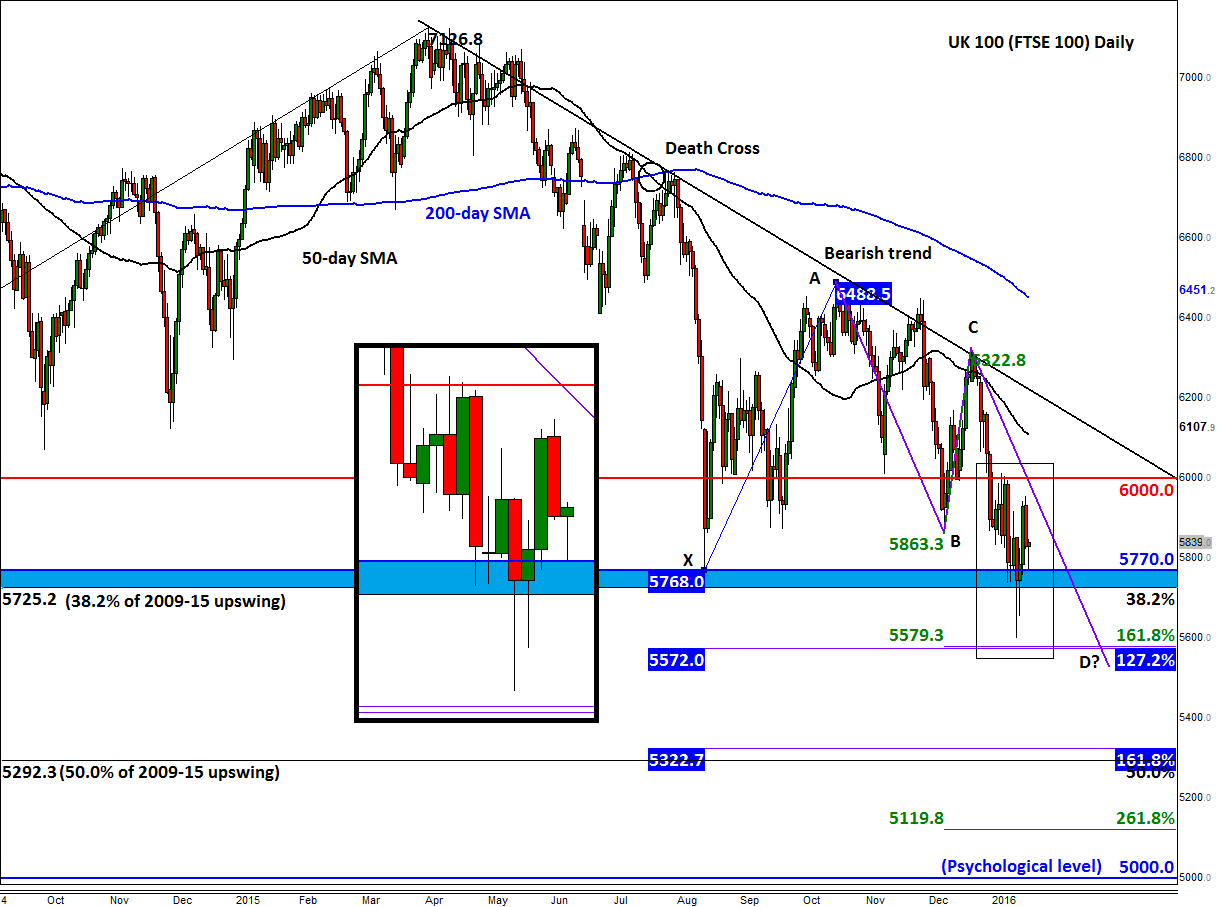