EUR/USD spent the past week continuing its recent consolidation above the 1.0800 support level. On Thursday, however, the euro resumed a more bearish stance after European Central Bank (ECB) President Mario Draghi held a press conference during which he made some rather dovish comments, hinting that the ECB may adopt a more aggressive easing stance going forward. Draghi stressed that the ECB would be ready and willing to act, if warranted, by implementing the many tools at its disposal. This brought EUR/USD back down to hit the noted 1.0800 support. With an increasingly dovish ECB set in stark contrast to a potential Federal Reserve monetary tightening cycle, the longer-term bias for EUR/USD continues to be bearish in line with the well-established long-term downtrend for the currency pair. With any sustained re-break below 1.0800, the next major target remains at the major 1.0500 support level, last re-approached in early December. Further to the downside, any confirmed continuation of the downtrend momentum should then begin to target the 1.0200 support level. 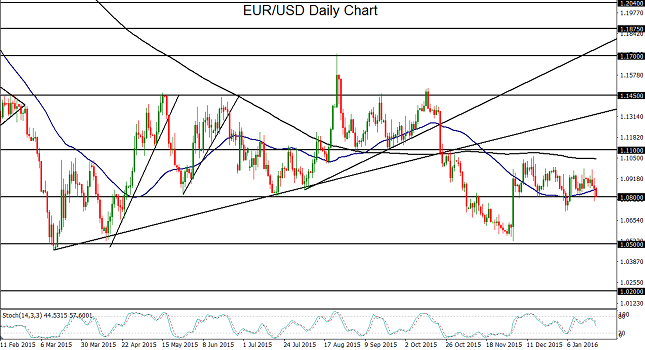 In the middle of this past week, USD/JPY fell to a one-year low on sharp plunges in global stock markets. This low was a continuation of the steep drops that have pressured the currency pair since mid-December. This past Wednesday, USD/JPY hit major support at the 116.00 level before bouncing. Towards the end of the week, however, as equities began to stabilize and rise, which was largely due to the ECB’s strong indication of additional easing, USD/JPY rebounded back above major resistance around the 118.00 level. Despite this strong rebound, however, risk of further volatility in the global financial markets remains. Any subsequent market instability that leads to additional asset flows towards the yen could place more pressure on USD/JPY. Currently, the noted 118.00 price area is the key level to watch. Sustained trading back under 118.00 on global volatility should once again target the lows around the noted 116.00 support level, followed by the 114.00 level. Major upside resistance in the event of an extended rebound resides around the key 120.00 level. 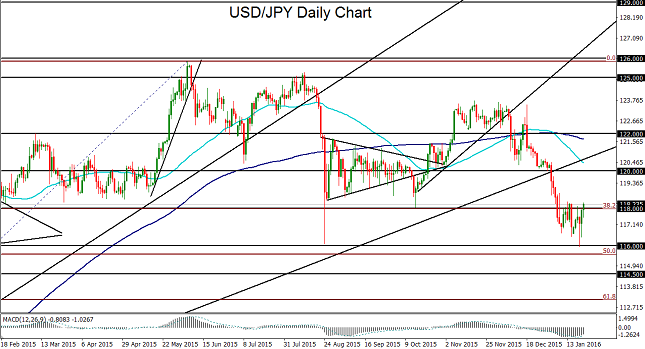 GBP/USD spent most of the past week dropping below the 1.4250 support level and then establishing a new 5½-year low at 1.4078. This low was hit after an exceptionally sharp plunge for the currency pair that has extended from mid-December. After hitting the low on Thursday, however, GBP/USD rose sharply on Friday to break out above the noted 1.4250 level once again. This rise came despite a significantly worse-than-expected reading for UK retail sales that came out on Friday. The surge could be attributed to the fact that GBP/USD was extremely oversold from a technical perspective after such a long and steep plummet, and was due for a short-covering/profit-taking bounce. Despite this late bounce, downside momentum and bearish sentiment continue to dominate this currency pair. This is due in part to continued doubt and uncertainty surrounding the Bank of England’s ability to begin a rate hiking cycle, given serious inflation and economic growth concerns. Any re-break below the 1.4250 level should once again target the 1.4000 support target to the downside. 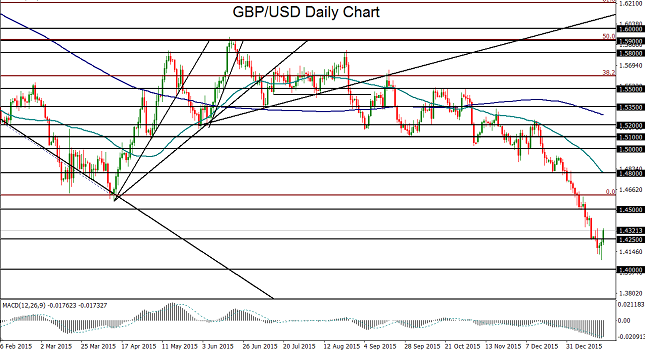 USD/CAD has spent much of this past week in a sharp pullback after having earlier reached up to a key resistance target at 1.4600. This pullback accelerated in midweek after the Bank of Canada’s decision to keep its key interest rate unchanged at 0.5% was accompanied by a less-dovish-than-expected statement that contained no indication of future rate cuts. The Canadian dollar strengthened after this announcement, and was subsequently further boosted by crude oil’s bounce off its multi-year lows that occurred late in the week. USD/CAD’s sharp run-up in the past weeks and months, but especially since the beginning of the year, led to a prolonged period when the currency pair had been technically well-overbought. After hitting and exceeding progressively higher upside targets at 1.4000, 1.4200, and most recently, a new 12-year high above 1.4600, USD/CAD had been in extremely overbought territory and due for at least a moderate pullback. Now that this pullback has begun to happen, what may be next? While this is unlikely to turn into a full blown reversal, due to fundamental forces that continue to support the currency pair over the longer-term, there could be further room to the downside, especially if crude oil continues to climb from its multi-year depths. In the event of sustained trading below the 1.4200 level, a major support target for the pullback is at the key 1.4000 psychological support level. For the time being, however, the currency pair remains in a strong bullish trend. Any continuation of this uptrend above 1.4600 has a major upside target at the 1.4900 resistance level. 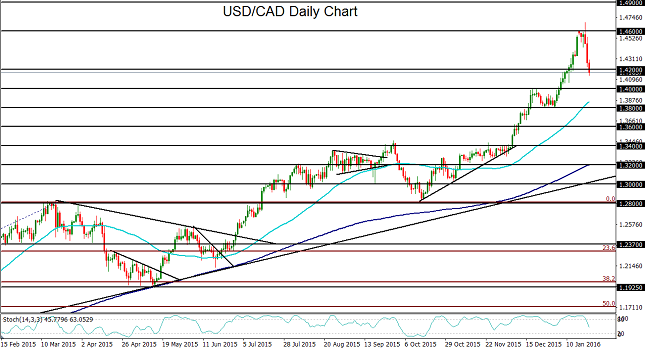