The primary global macroeconomic theme that prompted the most significant moves in the currency markets this past week was clearly central bank activity. In actuality, however, this theme can be more accurately described as inactivity, as all four major central banks that issued statements during the week kept interest rates unchanged. This included, in chronological order, the Bank of Japan, the US Federal Reserve, the Swiss National Bank, and the Bank of England. This non-action was in stark contrast to the prior week, when the European Central Bank introduced a broad array of rate cuts and stimulus measures that exceeded expectations, taking the markets by surprise.

Despite this past week’s conspicuous lack of interest rate changes, however, comments and implications that accompanied some of the central bank statements resulted in unexpected currency movement. Most notably, in issuing its policy statement and press conference this past Wednesday, the Fed asserted that expectations of US interest rate hikes this year had shifted down substantially to two projected hikes from prior forecasts of four hikes. These and other unexpectedly dovish comments led to an immediate plunge for the US dollar and a sharp rebound for gold along with other dollar-denominated commodities.

As for the Bank of Japan (BoJ), its choice to keep rates on hold instead of cutting further into negative territory led to a surge for the Japanese yen, as the accompanying statement left lingering uncertainty over when, or even if, further stimulus measures might be implemented. This was especially the case since the BoJ’s negative rate cut during its last meeting in January was unable to keep the yen from strengthening dramatically.

While the Swiss National Bank also left its monetary policy unchanged, comments from the central bank revealed its continuing estimation that the Swiss franc is overvalued, and that it was prepared to resume intervention in its currency should the franc persist in strengthening.

Finally, the Bank of England on Thursday maintained its bank rate at 0.5% as well as the magnitude of its asset purchases at £375 billion. The statement concluded with somewhat of a dovish outlook that asserted: "all members agree that, given the likely persistence of the headwinds weighing on the economy, when Bank Rate does begin to rise, it is expected to do so more gradually and to a lower level than in recent cycles." This dovish leaning, however, had been largely expected and priced into the markets within the past several weeks, along with concerns over the upcoming referendum on UK membership in the European Union. As such, the British pound managed to rise rather substantially after the monetary policy summary.

Building on the prior week’s rise in the euro that was largely due to comments by ECB President Mario Draghi indicating a possible end to rate cuts, this past week’s Fed meeting prompted a large drop in the dollar and a resulting surge in EUR/USD. This surge has approached February’s high of 1.1375 before pulling back on Friday. During the course of this rise, the 50-day moving average has crossed above the 200-day moving average, forming a potentially bullish technical signal that is termed, a "golden cross." This bullish outlook, however, would be contingent upon the currency pair continuing to trade above major support at the key 1.1100 level. To the upside, the major resistance level to watch is the 1.1450 area. With any breakout above that level in the event of further dollar weakness, the next major upside target is at 1.1700. Any retreat and reversion back below the noted 1.1100 support level, however, could open the way to a return to the 1.0800 support lows. 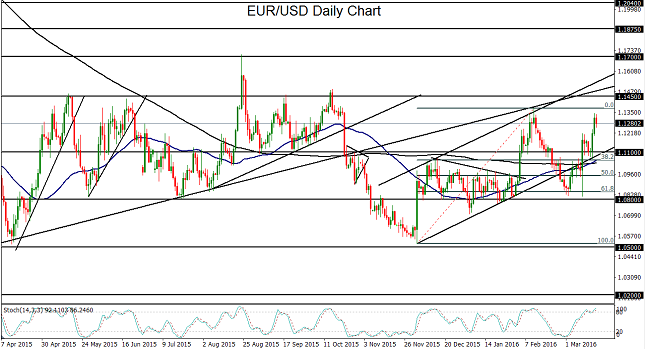 The combination of a dollar plunge after Wednesday’s Fed meeting and a moderate boost for the pound after Thursday’s Bank of England policy summary led to a sharp surge for GBP/USD. In the aftermath of both of these central bank statements, the currency pair broke out above its 50-day moving average once again and has gone on to reach key resistance at the 1.4500 level. The rise from late February’s multi-year lows has been substantial, putting into question the integrity of the downtrend that has been in place since at least mid-year last year. As with EUR/USD, the short-term direction for GBP/USD should be highly dependent upon the dollar’s sustained reaction to a slower pace of Fed rate hikes. If dollar weakness continues, the major upside level to watch is the key 1.4600 resistance level. With any breakout above 1.4600, a tentative recovery for GBP/USD could potentially be in the making, with a further upside target at 1.4800. To the downside, any retreat back down below the 1.4250 support level should reinstate the prior bearish bias. 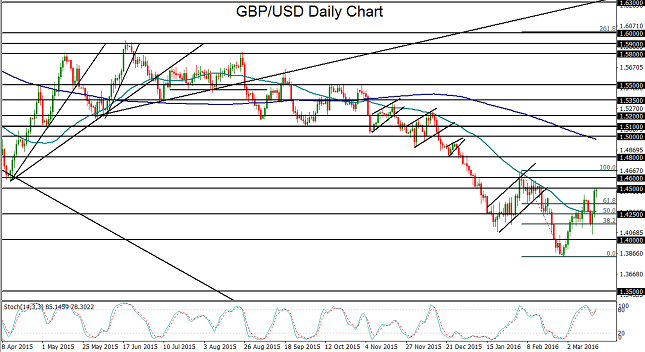 USD/JPY tumbled this past Thursday to dip briefly under major support around the key 111.00 level, the area of February’s double-bottom lows, and established a new long-term low in the process. This drop was driven primarily by Wednesday’s pivotal Fed statement on monetary policy, but also by the Bank of Japan a day earlier, which opted to keep interest rates on hold instead of cutting rates further into negative territory. After USD/JPY plummeted to a 111.00-area low in early February, the currency pair began a prolonged consolidation near its lows, which at one point in late February retested 111.00 to form the noted double-bottom chart pattern. Meanwhile, on the higher end of the consolidation, price formed a descending trend line that has served as the upper border of the trading range. Overall, this upper border combined with the lower horizontal border at the 111.00 double-bottom lows have formed a clear descending triangle pattern. With both the BOJ and Fed meetings having weighed heavily on USD/JPY, the currency pair is once again testing the lows of this triangle pattern, and has reached an important bearish technical juncture. With any further downside momentum that prompts a sustained breakdown below this triangle, the next major downside targets are at the key 110.00 and then 108.00 support objectives. 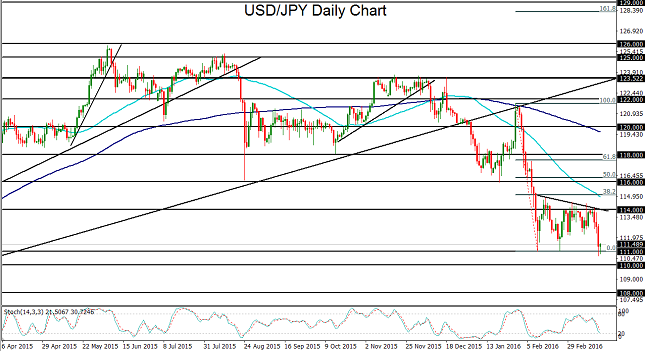 This past week, the dovish Fed statement combined with significantly stronger crude oil prices have led to a major breakdown for USD/CAD below both the key 1.3200 support level as well as a major uptrend support line extending all the way back to the mid-2014 lows. Towards the end of the week, the currency pair had settled in a tight consolidation slightly below the key 1.3000 psychological support level, which is also at an important 61.8% Fibonacci retracement of the recent bullish trend from the May 2015 lows up to January’s 1.4600-area multi-year high. As such, USD/CAD has reached down to and dipped below yet another critical support juncture. With any continued downside momentum and sustained trading below this 1.3000 level due to a continued recovery for crude oil and weakness in the US dollar, the next major downside target is at the key 1.2800 support level. Any further drop below 1.2800 could open the way for USD/CAD to target further weakness towards 1.2500. 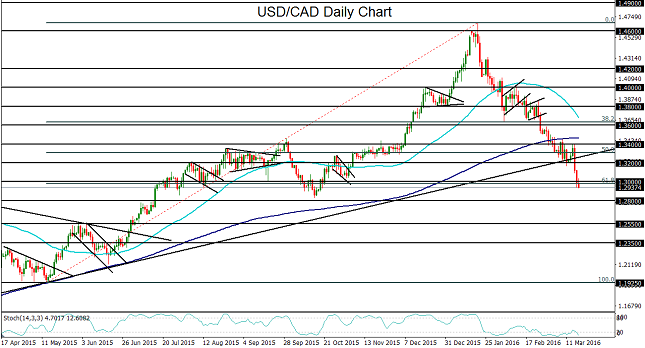