<p>US Federal Reserve members have repeatedly voiced concerns over the risk of a potential UK exit from the European Union, or “Brexit.” Most recently, Fed Governor and voting FOMC member, Jerome Powell, alluded to the upcoming EU referendum in a speech on Thursday. While Powell reinforced the Fed’s recent hawkish turn, stating that a rate hike should be appropriate “fairly soon,” he also mentioned that the EU referendum remained a significant concern.</p>

US Federal Reserve members have repeatedly voiced concerns over the risk of a potential UK exit from the European Union, or "Brexit." Most recently, Fed Governor and voting FOMC member, Jerome Powell, alluded to the upcoming EU referendum in a speech on Thursday. While Powell reinforced the Fed’s recent hawkish turn, stating that a rate hike should be appropriate "fairly soon," he also mentioned that the EU referendum remained a significant concern.

Although the Fed has indeed shown a more hawkish face to the public lately, which was initiated on last week’s release of minutes from April’s FOMC meeting, one of the hallmarks of the central bank is its unfailingly cautious stance. With the next FOMC meeting scheduled to conclude on June 15th and the UK’s EU referendum slated for June 23rd, just over a week later, it would be difficult to imagine the Fed implementing a rate hike on the precipice of such a global risk event. This is especially the case since FOMC members have already made their concerns about the referendum conspicuously public.

The latest UK polls with regard to the referendum have been showing steadily increasing support for the UK to stay in the European Union. Therefore, the risk of a "Brexit" has lessened to a degree, but the possibility of a popular vote to leave the EU continues to be present. This possibility significantly lowers the probability of a Fed rate hike in June.

The Fed Fund futures market provides a barometer of traders’ views on the probability of future rate hikes. The implied probability of a June hike initially spiked after the April FOMC minutes were released, and it rose to as high as 38% in subsequent days. It has since fallen back below 30% for several reasons, including consideration of the Fed’s perspective on Brexit risk. Meanwhile, the implied probability of a July rate hike has remained well above 50% since the minutes were released. This reinforces the view that once the risk of a Brexit passes, and provided the UK opts to stay in the EU, the probability of an impending rate hike in the US rises markedly.

Of course, any rate hike by the Fed will be contingent upon continued positive economic data out of the US. A recent string of better-than-expected data has helped to fulfill that requirement. On Friday, preliminary GDP data for Q1 came out roughly as expected, rising at a 0.8% annualized rate vs the 0.5% rate that was previously reported last month. Focus has now turned to next Friday’s Non-Farm Payrolls employment report, which is an integral input in the Fed’s decision-making. A better-than-expected outcome should serve to raise the likelihood of a summer rate hike even more, though June should continue to carry a much lower probability due to imminent risk from the EU referendum.

As a result of forces combining to pressure EUR/USD lately, the currency pair has been in a sharp decline since it hit a new 8-month high at 1.1615 in early May. That high was established with a conspicuous "shooting star" reversal candle at the underside of a key uptrend line, indicating a clear bearish turning signal. Since that candle pattern formed, EUR/USD has spent the past three weeks falling precipitously, breaking down below both its 50-day moving average and a parallel trend channel that has roughly defined the recent uptrend since the December low near 1.0500. Currently, the currency pair has dropped down to establish more than a new 2-month low and appears poised to reverse even more of the gains made during the noted uptrend that began in December. In the process, EUR/USD has come close to approaching both a major support level at 1.1100 and its 200-day moving average slightly below that level. Any strong breakdown below this support could likely open the way for more losses and an extension of the slide since early May. In this event, the next major downside target continues to reside at the key 1.0800 support level. 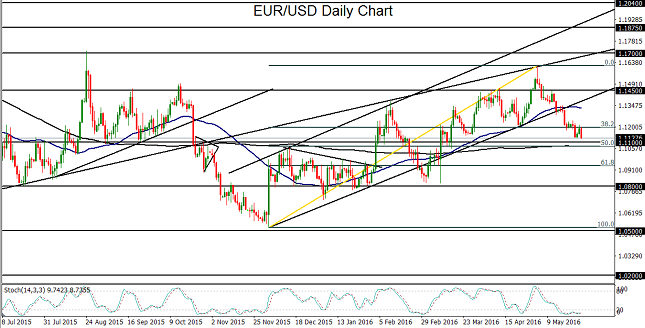 USD/CHF has been rising sharply since its early May lows below 0.9500 support. That low was accentuated by a clear "hammer" candle pattern, which hinted at a potentially likely turn to the upside. During the course of the rise from that low, USD/CHF has broken out above major prior resistance levels, including, most recently, the 0.9800 level. From there, the currency pair rose further to break out above its key 200-day moving average. After the breakout, the past week has seen a tight consolidation just above that moving average. With further dollar strength above 0.9800 in anticipation of a summer rate hike by the Fed, USD/CHF could be pushed up to parity (1.0000) and higher from its current consolidation around 0.9900. Further upside resistance targets above parity reside at 1.0100 and then 1.0300. Any return below the noted 0.9800 support/resistance level, however, could lead to a breakdown of the current recovery. 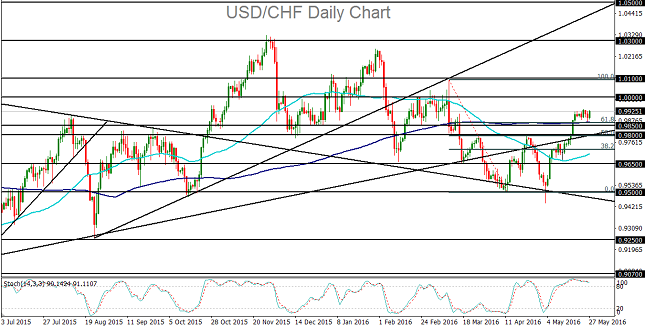 AUD/USD has been falling in a sharp downtrend for the past month from its late April high above 0.7800. Since early May, this slide has led to strong breakdowns below major support levels, including: the 50-day moving average, an uptrend channel extending back to January’s multi-year lows near 0.6800, the key 0.7500 and 0.7350 support levels, and most recently, the 200-day moving average. The latest culmination of this precipitous decline has seen AUD/USD reach down to hit its key downside support target at 0.7200, around which the currency pair has fluctuated for the past week. Looking ahead, the persistent contrast between an increasingly dovish Reserve Bank of Australia and what appears to be an increasingly hawkish Federal Reserve is likely to lead to a continuation of both the short-term and long-term downtrends for AUD/USD. With any decisive breakdown below 0.7200, the next major downside target is at the 0.7000 psychological support level. 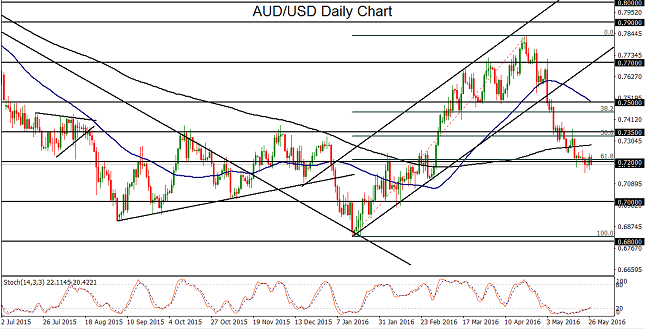