FX update: Dollar hit by profit-taking; RBNZ and US CPI in focus

The major FX pairs further extended their losses earlier this morning, before rebounding to turn green on the day as North American participants slowly made their way to their trading stations.

The major FX pairs further extended their losses earlier this morning, before rebounding to turn green on the day as North American participants slowly made their way to their trading stations. Commodity currencies have been performing slightly better, owing to a positive sentiment across the global stock markets, as well as firmer oil and precious metal prices today. Among the commodity FX, the Aussie has been the strongest, followed by the Loonie, with the kiwi being the weakest of the three. Part of the reason for the slight rebound in major currencies seems to be due to a small pullback in the US dollar. The Dollar Index was running on empty and looking overstretched as it rallied for the eight-consecutive day yesterday. So, I think we are seeing some profit-taking on long dollar positions, especially as we haven’t witnessed any further improvement in US numbers since those jobs figures were released earlier this month to fundamentally change the outlook for interest rates. Speaking of which, the Federal Reserve Chairman Jay Powell might provide further clues on the future of monetary policy at a speech in Mississippi, later at 17:45 GMT. However, that’s the only notable scheduled fundamental event from North America today – with JOLTS Job Openings perhaps being the only exception. There will be more significant US data to look forward to later on in the week, including the key consumer price inflation data tomorrow.

Ahead of the US CPI data, we think that the Reserve Bank of New Zealand meeting will be the key focal point in the early hours of Wednesday. The central bank’s monetary policy statement will be released at 01:00 GMT with the press conference due to start an hour later at 02:00 GMT. The RBNZ is highly likely to keep monetary policy unchanged and hold interest rates at the current level of 1.75%, where they have been since November 2016. Prior to that, the RBNZ had been on a policy loosening cycle that re-started in June 2015, after it had somewhat prematurely started a hiking cycle in 2014.

As well as New Zealand, policymakers at the central bank will take into account the general financial and economic conditions of the global economy and in particular China when making a rate decision. Domestically, incoming data hasn’t been great recently:

Given the above overall weaker-than-expected domestic data, and a slowing Chinese economy, the RBNZ is likely to be a bit more dovish than expected at this meeting. The central bank will also be aware that several other central banks have also turned dovish recently, not least the Fed and the RBA. So, it wouldn’t want to be the odd one out, and irrationally cause the exchange rate to appreciate.

The NZD/USD and other kiwi crosses could therefore drop. We will be watching the NZD/CAD for a potential drop given that it has recently been making lower lows and lower highs since topping out in December. A potential drop to next key support at 0.8750 would not come as surprise to us. 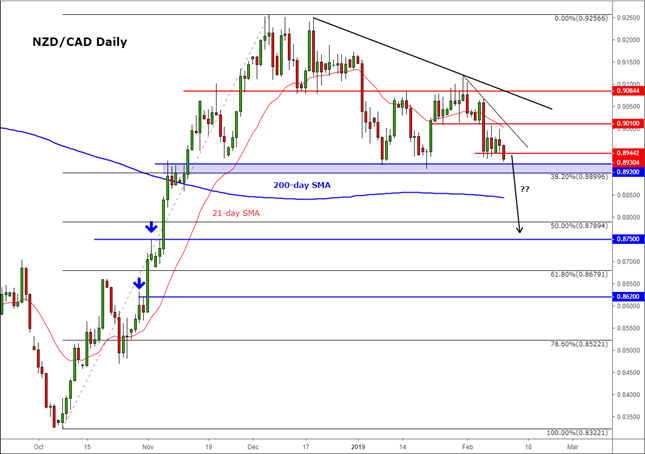