GBP/JPY approaches critical resistance ahead of Bank of England decision

Boosted largely by a sharply extended fall in the Japanese yen, GBP/JPY rose to a new year-to-date high on Tuesday, approaching key resistance around the 148.00 handle and re-testing December’s highs. As Frexit concerns have dissipated for the time being after pro-euro Emmanuel Macron was voted in as President-elect of France over the weekend, currency market focus has shifted back to the beginning stages of UK/EU Brexit negotiations, the UK’s snap election in June, and the Bank of England’s monetary policy decision on Thursday.

Boosted largely by a sharply extended fall in the Japanese yen, GBP/JPY rose to a new year-to-date high on Tuesday, approaching key resistance around the 148.00 handle and re-testing December’s highs. As Frexit concerns have dissipated for the time being after pro-euro Emmanuel Macron was voted in as President-elect of France over the weekend, currency market focus has shifted back to the beginning stages of UK/EU Brexit negotiations, the UK’s snap election in June, and the Bank of England’s monetary policy decision on Thursday.

The snap election that was recently called for by UK Prime Minister Theresa May is scheduled for June 8th. In calling for an election sooner than expected, May was aiming to secure a solid mandate to deal with difficult negotiations with the European Union as she sees fit, amid the ongoing process of UK/EU separation. The pound rose sharply on that announcement due in large part to the fact that May’s Conservative Party was, and continues to remain, far ahead of the Labour Party and other UK political parties in public polling. Brexit negotiations going forward will be heavily impacted by who wins this election, but at this point, polls and probabilities heavily favor Theresa May.

The pound has generally remained bid since that snap election announcement, especially against a falling Japanese yen, which has struggled immensely in the past three weeks as safe-haven demand has dwindled amid a risk-on market environment and persistently low market volatility.

Thursday’s monetary policy decision from the Bank of England will be a key factor in how sterling moves ahead of the UK election. Currently, the UK’s central bank is juggling conflicting forces of weak economic growth and rising inflation. As a result, it is widely expected that the BoE will leave its neutral policy and record-low 0.25% interest rate unchanged. It is also expected, however, that Monetary Policy Committee member Kristin Forbes will once again vote against her colleagues for a rate hike, as she did during the last BoE meeting in March. Any surprises on Thursday, whether in the policy summary, rate decision, or quarterly inflation report, could have a significant impact on GBP/JPY in the run-up to June’s election.

In the meantime, GBP/JPY, as noted, has reached a critical technical juncture. With major resistance around the 148.00-area, the potential continuation of the sharp breakout run within the past three weeks is currently at stake. Continued low market volatility coupled with a further rally in the pound could prompt an extended breakout above 148.00, in which case the next major upside target is around the 152.00 resistance level. Any pullback from current resistance should be met by key support around the 145.00 level. 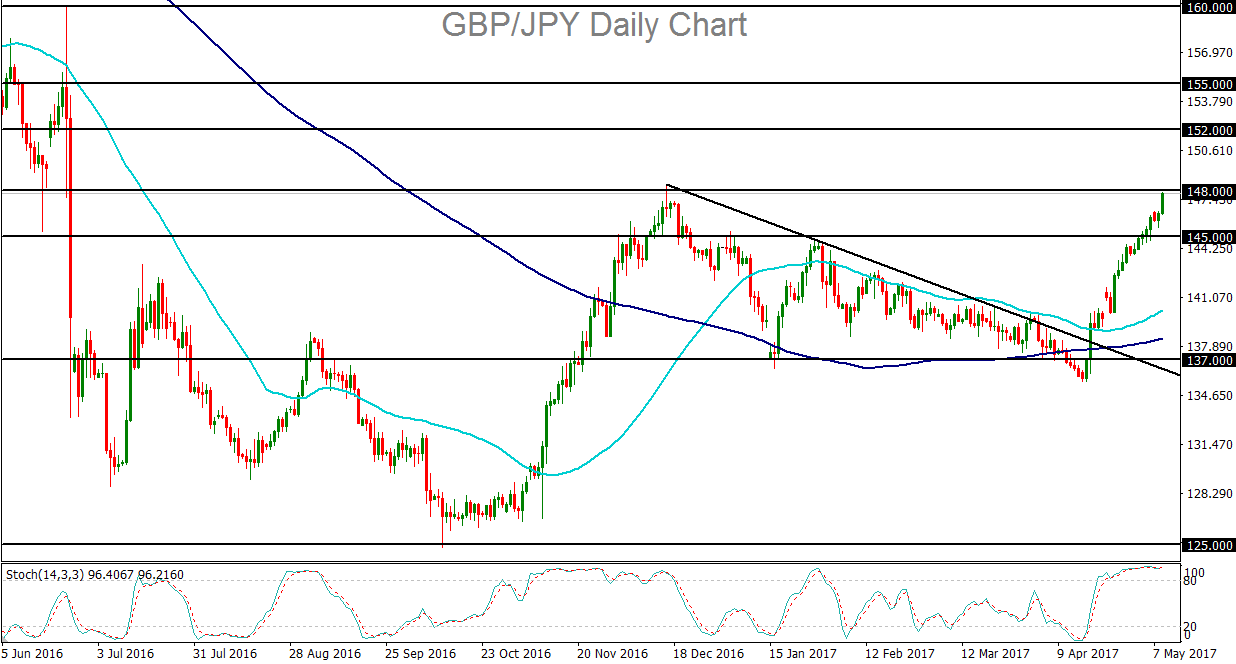