The British pound plunged against other major currencies early on Monday as the prospect of a UK exit, or so-called "Brexit," from the European Union came into focus. While the Brexit vote has been scheduled for a full four months from now, current speculation on this potentially historic event has placed additional pressure on both the euro as well as the UK’s already-embattled currency. London Mayor Boris Johnson’s comments over the weekend in support of Brexit further weighed on the pound.

As the GBP/USD currency pair initially broke down on this news to nearly a seven-year low, GBP/JPY dropped below its key 160.00 support level to establish a new two-year low, dipping below its most recent low just under 160.00 that was hit less than two weeks ago. This drop occurred despite the fact that a general "risk-on" market sentiment prevailed on Monday, which pushed up global equity markets and dragged down the safe haven Japanese yen.

Helping to boost equity markets and pressure the yen was another major market event on Monday – the surge in crude oil prices. This rise was prompted largely by an International Energy Agency report that projected US shale production to decrease substantially within the next two years. Despite this projection and continuing speculation over a possible OPEC output freeze, however, crude oil’s rampant oversupply situation remains an exceptionally challenging obstacle to a recovery in oil prices.

In short, Monday’s oil-driven rally in equity markets may potentially be more short-lived than many would hope. If this is indeed the case, recent volatility in the equity markets could well continue and the Japanese yen could benefit further, placing additional pressure on both USD/JPY and GBP/JPY. This could be the case even if the Bank of Japan decides at some point to intervene and limit yen appreciation.

Any such rise in the Japanese yen coupled with further downside for the British pound due to Brexit speculation as well as an increasingly dovish Bank of England, should weigh significantly on GBP/JPY, potentially continuing the strong downtrend that has been in place since mid-year last year. In the event of sustained trading below the noted 160.00 support level, the next major downside targets are at the 156.50 and then 154.00 support levels. 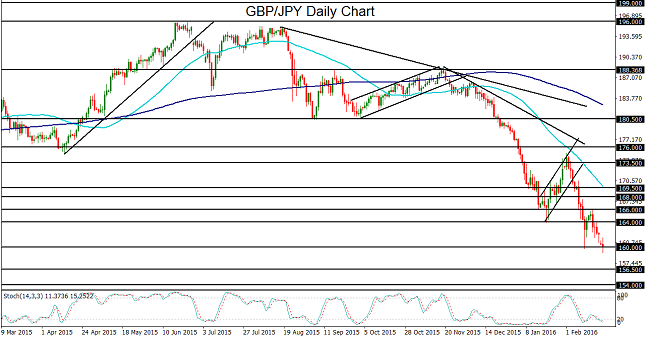