Against the yen however, sterling strength has been relatively muted due to a recent surge in the Japanese currency as geopolitical and market risks have helped increase demand for the yen’s perceived safety. As a result, the GBP/JPY currency pair has continued to follow a bearish trend that has been in place for more than three months, despite the pound’s recent resurgence.

Although much of the market concerns over Brexit consequences have diminished and/or have already been priced-in to the lagging pound in the past several months since the UK’s June referendum, many unknowns still remain as to how the UK’s economic landscape will unfold as the process of separation begins in earnest. Article 50 will be triggered next week on March 29th.

In addition to Brexit, other near-term geopolitical risks in Europe and the US, which include the upcoming French presidential elections and ongoing issues surrounding the US Trump Administration, could lend to some further support for the safe-haven yen.

Amid these fundamental market risks that have persisted in placing pressure on GBP/JPY, the currency pair continues to follow a falling trend line that extends back to the mid-December high around 148.00. Furthermore, price action has recently been trading in a relatively tight range between its key 50-day and 200-day moving averages, which suggests that the currency pair remains in consolidation and could be poised for a breakout move as the noted market risks unfold.

Ahead of these risks, the directional bias for GBP/JPY continues to lean towards the downside, in-line with the prevailing medium-term trend. If the currency pair continues to respect the noted downtrend line, a clear short-term downside target is at the key 137.00 support level, which is also in the vicinity of the noted 200-day moving average and the 50% retracement of the October-December uptrend. 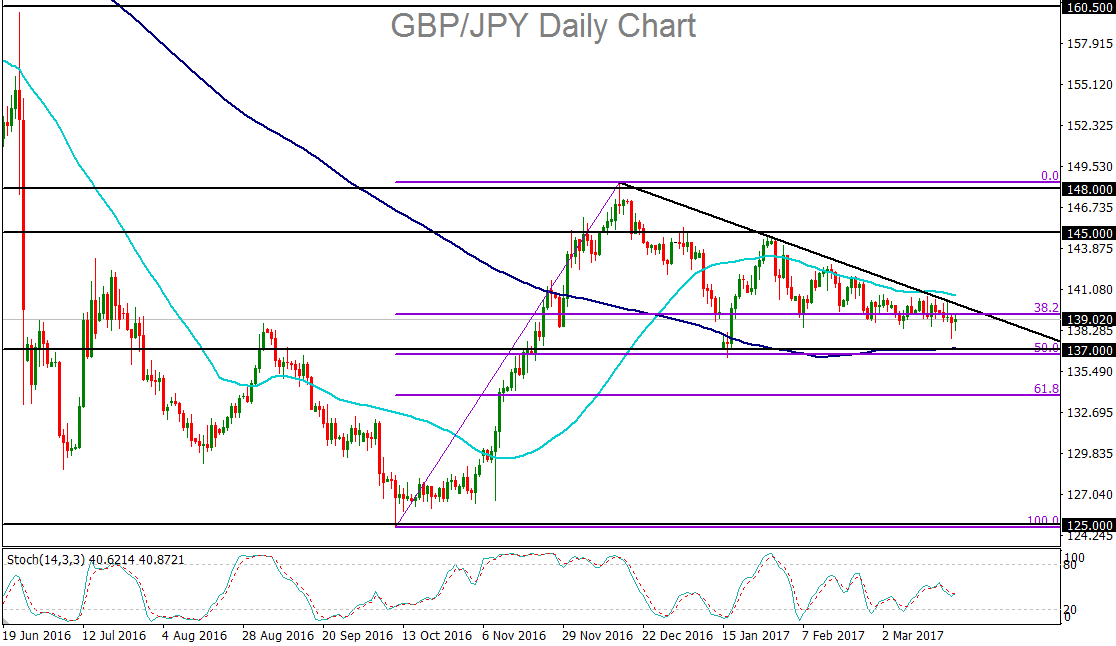