GBP/NZD: one to watch ahead of NZ GDP, Brexit vote

<p>The GBP/NZD is among the more interesting and VERY volatile GBP pairs to watch as we approach next Thursday’s EU referendum. It is not everyone’s cup of tea, but with appropriate position size and risk management, it could offer decent trading opportunities as it a technically-friendly pair. The reason we are looking at this pair today is twofold.</p>

The GBP/NZD is among the more interesting and VERY volatile GBP pairs to watch as we approach next Thursday’s EU referendum. It is not everyone’s cup of tea, but with appropriate position size and risk management, it could offer decent trading opportunities as it a technically-friendly pair. The reason we are looking at this pair today is twofold.

First, the GBP has found some much-needed support after being hammered in recent days as sterling short positions rose to a 5-year high (according to data from the CFTC). Today, it has enjoyed a bit of a short-covering bounce, helped further by news the UK unemployment rate fell to 5.0%, its lowest level since November 2005, as employment hit 74.2%, the joint highest since records began in 1971. In addition, applications for unemployment benefits fell by a slightly larger amount in May (0.4K) than expected. Meanwhile earnings including bonuses were up 2% in the three months to April, unchanged from March and higher than 1.7% expected.

The second reason we are looking at the GBP/NZD today is because of New Zealand data. Earlier, the GDT Price Index came in unchanged, which failed to derail the NZD’s rebound. Later this evening, at 11:45 BST, or Thursday morning NZ time, we will have the quarterly GDP report. The New Zealand economy is expected to have grown by 0.5% in the first quarter of this year versus 0.9% in Q4 of 2015. If the actual number deviates significantly from expectations then the NZD could move sharply in the direction of the surprise.

The NZD rallied sharply last week after the RBNZ left interest rates unchanged and raised its inflation forecasts. But it did warn about further rate cuts down the line. Initially, investors chose to ignore that warning, but the NZD has pulled back a little bit over the past few days, excluding today. Against, the pound, the NZD is little changed at the time of this writing as both currencies have bounced today.

The GBP/NDZ could rally sharply if New Zealand’s GDP misses expectations. Beyond this, the pair’s next big move will likely come late next week when the outcome of the EU-UK vote is announced.

From a technical perspective, the GBP/NZD remains inside a wide bearish channel and below the main moving averages which are all pointing lower. So the trend is clearly bearish for now. However, the cross has bounced off the psychologically-important level at 2.0000 this week and is continuing to hold above it, but below the prior support at 2.0360.

This 2.0360 level will need to be watched closely for a break above it could potentially lead to a big bounce – big enough to lift price towards the next major resistance in the 2.10 area if the New Zealand GDP is weak enough tonight, or even the top of the bearish channel. Otherwise, we may have to wait until the outcome of the EU referendum before we visit these levels, assuming the "remain" camp will come out victorious.

Alternatively, the GBP/NZD could break below 2.0000 and drop to the next big area of support around 1.9300-1.9500 before it can bounce back. This is where the prior lows meet the support trend of the bearish channel. In addition, the long-term 78.6% Fibonacci retracement level and the 161.8% Fibonacci extension level of the most recent rally also come into play around these levels. 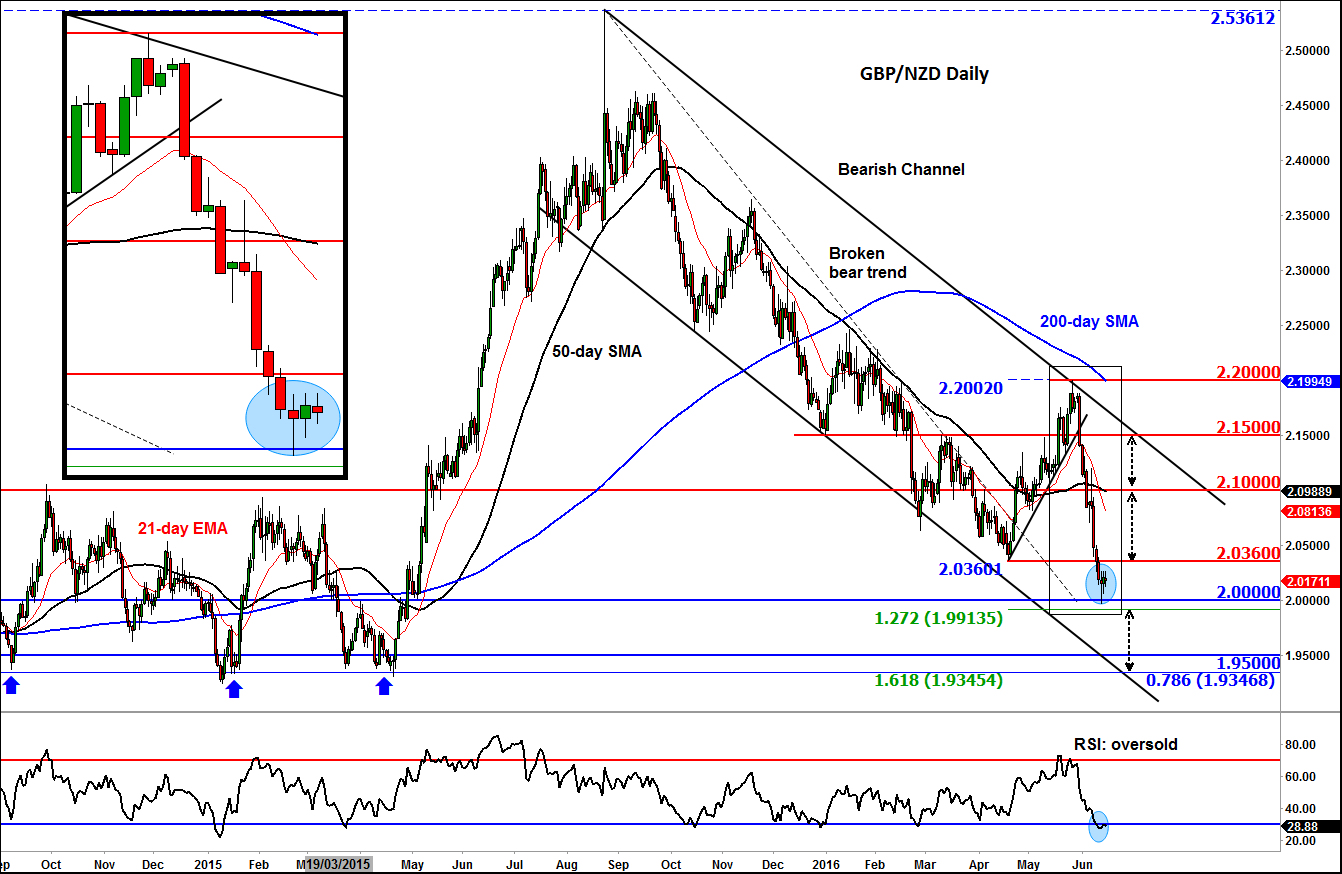