GBP/USD’s most recent drop has not been due to dollar-strength, as the greenback has generally been in pullback mode since the beginning of the new year. Rather, sterling has continued to be haunted by the looming prospect of the UK’s formal separation from the European Union, otherwise known as Brexit. Article 50, which formally begins the separation process, is slated to be triggered by the end of March.

Over this past weekend, UK Prime Minister Theresa May seemed to suggest that there would be a so-called “hard” Brexit – implying a clean and complete break from the EU – when she said that the UK would not be able to keep “bits” of its EU membership. Later, May attempted to clarify her comments, saying that a hard Brexit was not inevitable, and that the goal was simply to get a good trading deal for the UK with the European market. The damage to the pound had been done, however, as it dropped towards its 1.2000-area support target.

Wednesday saw GBP/USD reach further down to form the double-bottom with October’s low before rebounding in the aftermath of Trump’s press conference, which placed pressure on the dollar. As it presently stands, despite the current dollar pullback, the greenback remains fundamentally supported as the Federal Reserve prepares to hike interest rates at least three times this year in light of healthy employment data and rising inflation expectations under the incoming Trump Administration. In contrast, the pound remains fundamentally pressured in part due to the many uncertainties still surrounding the impending triggering of Brexit this quarter. Therefore, the current fundamental bias continues to lean towards further downside for the GBP/USD currency pair.

At the same time, the technical perspective points out a rather clear “line in the sand” for GBP/USD. The 1.2000 level is a major technical and psychological support level that has not been breached to the downside in decades. If the downside bias for the pound and/or the upside bias for the dollar can prompt a GBP/USD breakdown below 1.2000, it could potentially open the way to significantly further losses. If 1.2000 holds, however, the double-bottom pattern will have been kept intact, and a relief rebound could boost the pair from its long-term lows back up towards the key 1.2800 resistance area. 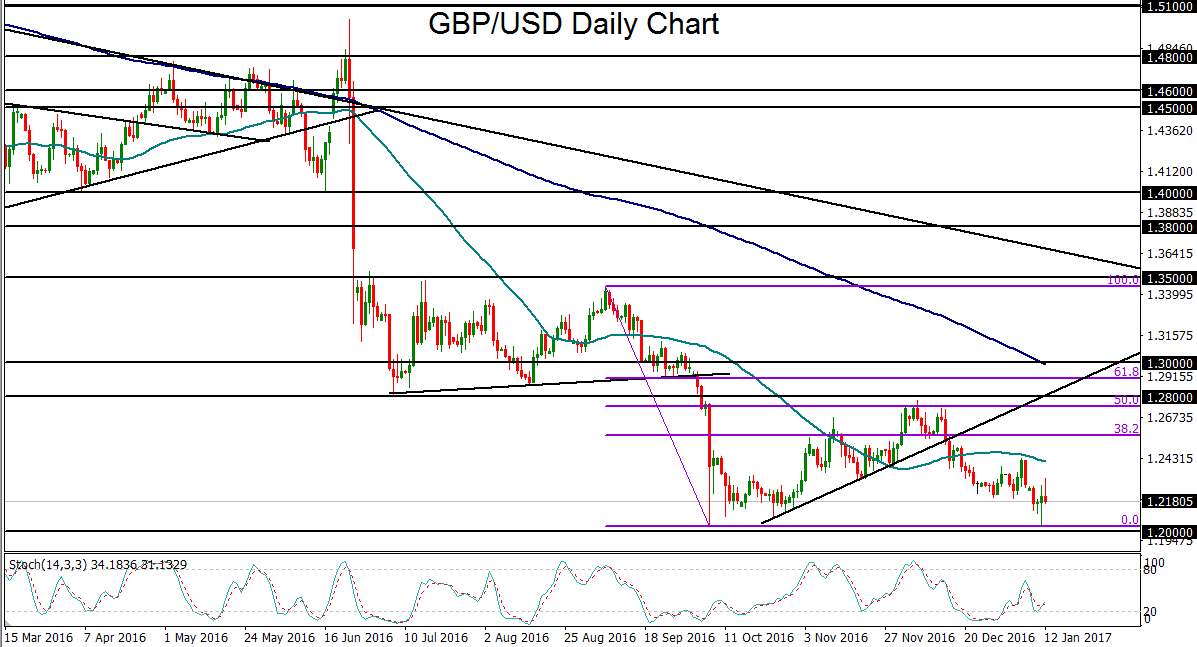