Despite a lagging US dollar in recent days and weeks that has been dragged down by dovish signals emanating from the words of Federal Reserve officials, sterling has been even weaker. Weakness in the pound, which has fallen considerably as of late against other major currencies, including the dollar, euro, and yen, has been brought on not only by a rather consistently dovish Bank of England, but also by a looming June referendum that draws ever closer, in which the UK will decide whether or not it will remain in the European Union.

Due in part to speculation over this potential "Brexit," GBP/USD has continued to trade in a weakened state, consolidating not far above its near-7-year low below 1.4000 that was just established in late February.

Arguably, the currency pair has only been able to stay afloat in recent weeks because of the fact that the dollar has undergone its own beating from the Fed’s seemingly intensifying dovish stance. This increasing dovishness stands in sharp contrast to the central bank’s clearly hawkish leanings towards the end of last year, and more closely aligns the Fed to the Bank of England’s continuous postponement of its own monetary tightening objectives.

A week from this writing, the Bank of England will announce its official bank rate and monetary policy summary. Although the central bank is not expected to change interest rates at that meeting, the policy summary will, as always, be scrutinized closely for any clues as to the bank’s stance on interest rates going forward.

From a technical perspective, GBP/USD appears once again to be poised for a potential breakdown below the key 1.4000 psychological level. With any further breakdown below February’s noted multi-year low of 1.3835, a continuation of the long-term downtrend will have been confirmed, with the next major downside target considerably lower at the key 1.3500 support level. 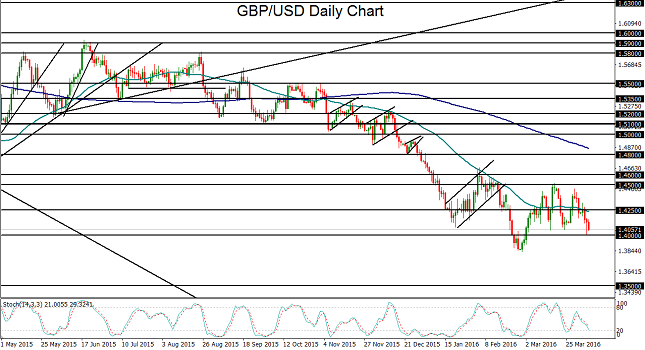