The Canadian dollar has had an interesting day to say the least. Initially it rallied on the back of stronger oil prices and as the Bank of Canada decided to keep interest rates unchanged. However, despite oil prices extending their gains on the back of a sharper-than-expected US crude inventory reduction, the Canadian dollar slumped as the BoC Governor, Stephen Poloz, said the central bank “actively” discussed the prospects of adding more stimulus into the economy.

The Canadian dollar has had an interesting day to say the least. Initially it rallied on the back of stronger oil prices and as the Bank of Canada decided to keep interest rates unchanged. However, despite oil prices extending their gains on the back of a sharper-than-expected US crude inventory reduction, the Canadian dollar slumped as the BoC Governor, Stephen Poloz, said the central bank “actively” discussed the prospects of adding more stimulus into the economy. The market interpreted this as a sign that the BoC has turned dovish again and this view was supported further by the fact the central bank downgraded its growth outlook. Although in the end the BoC decided not to cut interest rates, the potential is there to do so in the coming months should the Canadian economy deteriorate further. This worry could keep the Canadian dollar under pressure going forward, though a rallying oil price may limit the downside nonetheless.

Meanwhile the British pound found some much-needed relief earlier today, though it has since given up much of its gains. However, against the Canadian dollar, the pound was only slightly weaker at the time of this writing. The GBP/CAD may therefore be among a handful of GBP crosses which has the best chance of making a comeback. At the moment though even that sounds highly unlikely given the growing negative sentiment towards the British economy. But there is a possibility that the market may have overreacted to all this Brexit-related concerns. After all, economic data in the UK continues to surprise to the upside, such as wages and employment data we saw earlier today and CPI the day before. In fact, if the weakness in sterling persists, inflation in the UK could overshoot which could force the Bank of England to take action by tightening its policy, which in turn could support the ailing currency. So, who knows, the pound could well be near a major low, if it hasn’t already bottomed out.

From a technical perspective, the GBP/CAD looks anything but bullish, like almost every other GBP cross. However, it has stabilised somewhat in recent days around its long-term bullish trend line at 1.5730 and around the 1.6000 psychological level. For as long as price holds above 1.6000 now there is a possibility for the GBP/CAD to potentially rebound towards some old support levels such as 1.67000. In the short-term it needs to break the 1.6170 resistance if it has any chance of making a comeback. If however 1.60 gives way then a revisit of the long-term trend line could be highly likely. Not that we need the RSI momentum indicator to tell us, but the GBP/CAD is severally oversold, which further supports the case for a GBP short-covering recovery. 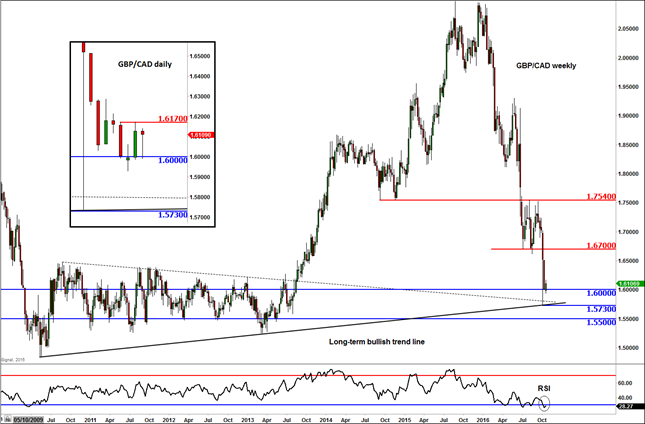