The GBP/USD and the other pound crosses are understandably very sensitive to Brexit-related headlines given that we are fast approaching the March 29 exit date.

The GBP/USD and the other pound crosses are understandably very sensitive to Brexit-related headlines given that we are fast approaching the March 29 exit date. With just 9 days to go, the UK could crash out of the EU without a deal, unless the EU grants an extension. This unfortunately means not a lot of people are paying much attention to UK data currently. Indeed, Tuesday’s release of stronger UK wages numbers were shrugged off by traders, while today’s release of CPI — usually a major market-moving economic number — had minimal impact on the pound. For the same reason, the Bank of England’s meeting on Thursday will likely be a damp squib of an event. On the Brexit front, the latest news is that EU leaders are apparently planning on a contingent offer on Brexit extension in light of the Speaker of the House blocking Theresa May's plan to put her Brexit deal to another vote this week. According to Downing Street, the Prime Minister will not ask for a long delay. Many people think the extension will be until the end of June. Any delay will be subject to the agreement of all the other 27 EU members, who may ask for certain conditions ahead of the EU summit on Thursday.

So, the GBP/USD is unlikely to move meaningfully on anything but Brexit headlines from this side of the pond. The other side of the equation is obviously the US dollar, which could move sharply today in reaction to the latest economic and interest rate projections by the US Federal Reserve. My colleague Matt Weller reckons that “traders are far too dovish on the path of monetary policy over the course of 2019,” judging by the CME’s FedWatch tool which suggests the markets are pricing in about a 25% chance of a rate cut by December. But if the median member revises down their expectation to just one interest rate hike this year (from two in December), this would still be more hawkish than the markets are currently anticipating. If this is the case, then the dollar could react positively tonight, causing the GBP/USD to potentially drop back below 1.3200. However, if the Fed is surprisingly more dovish than expected then the dollar could slump, and this may provide some support for the cable. We have a few interesting levels on the 4-hour chart of the cable, below. 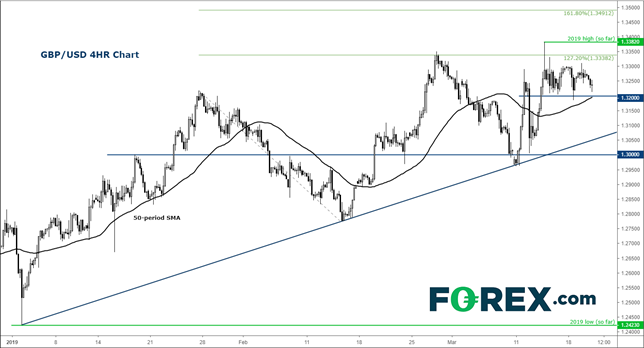