The evidence currently suggests that GBP/USD is merely seeing a healthy pullback so far...

There are no two ways about it: GBP/USD bulls were on Cloud Nine in February.

The currency pair, colloquially called “cable” for the transatlantic cable used to process transactions back in the 19th century, went on a tear through the middle of February, rising in 13 out of 15 straight days to gain a breathtaking 600 pips as the UK appeared to be a world leader in vaccinating its population, raising hopes that the UK economy could return to some sense of normalcy this summer.

While this is certainly a sound thesis and may still ultimately come to pass, the market has tendency to take good ideas to extreme levels, and that’s exactly what happened to GBP/USD in late February. As the chart below shows, the pair accelerated out of its gradually rising channel to peak above 1.4200 intraday before reversing sharply on 24 February. Rates then carved out an “evening star” pattern; this relatively rare 3-candle reversal pattern shows a shift from buying to selling pressure and is often seen at near-term tops in the market: 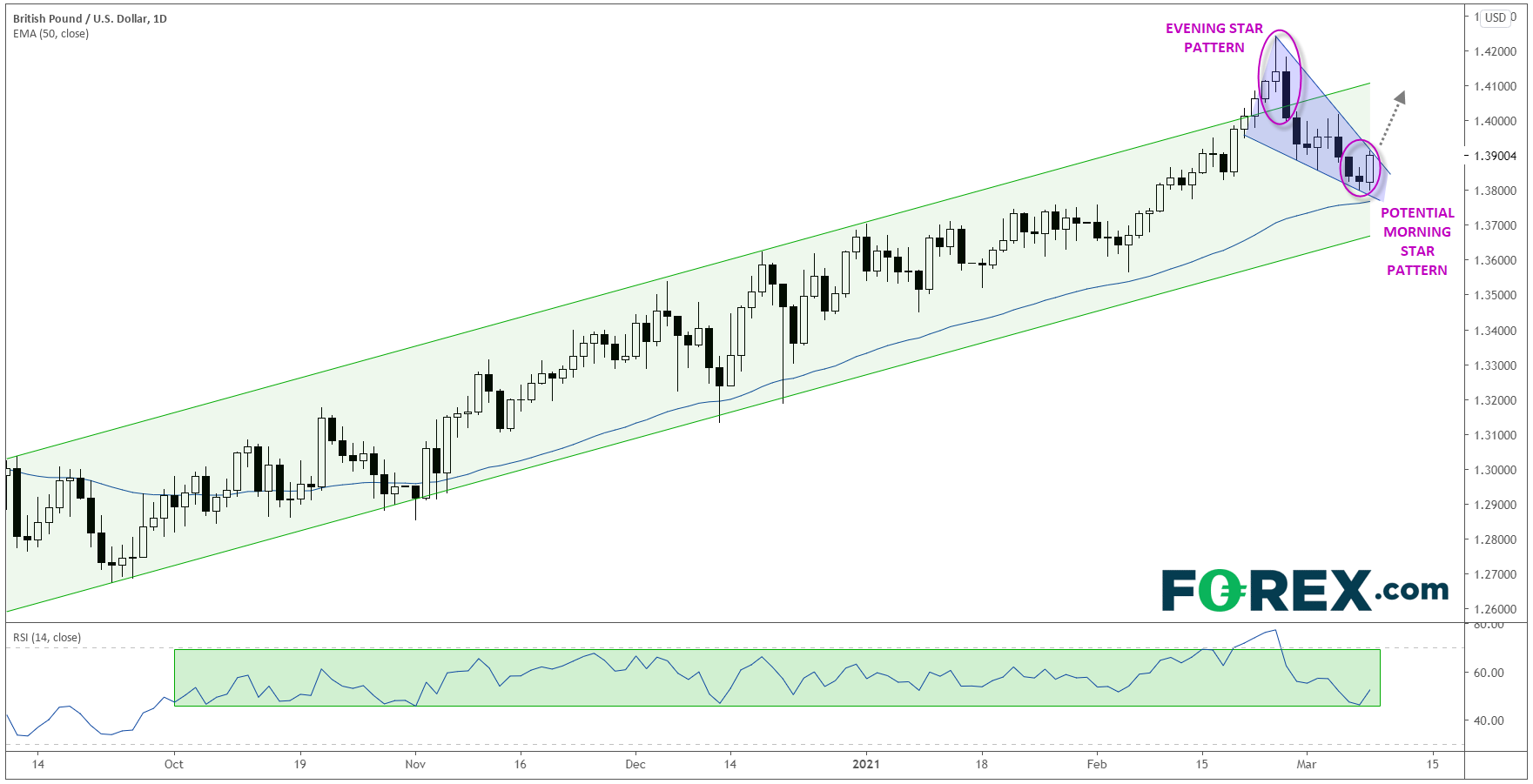 Since then, the pair has dropped back below the 1.40 handle to trade back near the middle of its previous channel. With rates currently consolidating there, the question on every cable trader’s mind is “Was that a ‘blowoff top’ in GBP/USD or merely a healthy pullback in the context of the longer-term bullish trend?”

Like every rhetorical question we ask, it’s impossible to know for certain in advance, but we can look at different indicators and tools to help tilt the odds in our favor.

One of the big themes boosting the greenback in recent weeks has been the relentless rally in treasury yields. Traders are increasingly becoming convinced that all the fiscal and monetary stimulus out of the US will eventually lead to a pickup in inflation. While this is certainly a relevant longer-term consideration, it’s worth noting that shorter-term bond yields tend to have a stronger correlation to currency values, and on that front, 2-year UK bond yields have actually risen by more than their US counterparts over the past month, so the fundamental anchor of bond yields actually favors relative strength in GBP/USD in the short term.

Meanwhile, the technical backdrop also remains generally supportive, despite the pullback over the last two weeks. The RSI indicator is showing early signs of stabilizing near the 45 level that has provided a floor throughout the past six months, supporting the notion that the established uptrend remains intact. Likewise, prices are stabilizing above the 50-day EMA and even showing early signs of a small “morning star” pattern, the exact inverse of the evening star pattern that marked a top a couple of weeks back. Finally, rates are carving out a falling wedge pattern, which shows waning selling pressure and a potential resumption of the bullish trend if the pair is able to break above 1.39 this week.

As always, we remain open to new information that paints a more bearish picture (in the apocryphal words of famous economist John Maynard Keynes, “When the facts change, I change my mind. What do you do sir?”), the evidence currently suggests that GBP/USD is merely seeing a healthy pullback and that the established uptrend could soon reassert itself for a rally back toward 1.4100+. Only a definitive price breakdown (below the 50-day EMA near 1.3800) and the RSI (below 45) would throw the medium-term bullish bias into doubt from here.