Speaking of economic data, tomorrow brings the February jobs report out of the UK. The market is expecting the unemployment rate to hold steady at 3.9%, with wage growth to pick up to 3.5%. On Wednesday, traders will get their first look at March CPI figures, which are expected to show prices rising at 2.0% (from 1.9% in February). We’ll also see March retail sales data on Thursday ahead of the long holiday weekend. While the Bank of England is likely to stay on the sidelines until there is more clarity surrounding Brexit, this week’s data will still be key for traders trying to handicap the central bank’s next move.

Technically speaking, GBP/USD is coiled for a potentially big breakout this week. The pair is reaching the pinnacle of a 1-month “symmetrical triangle” pattern, with an “inside candle” in progress so far today. This combination of patterns is a textbook sign of low-volatility consolidation and points to a higher velocity breakout sooner rather than later: 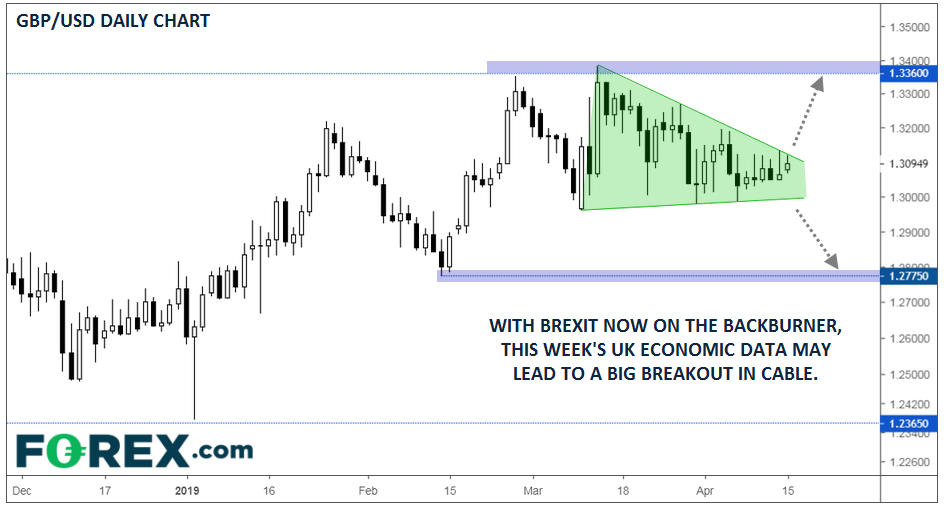 In terms of possible targets, cable bulls may look toward to the mid-March high near 1.3360 if we get a topside breakout, whereas a drop to at least the mid-February trough at 1.2775.