Since last night’s FOMC meeting, we have had two other major central bank rate decisions and some key data as well. But there is one last major central bank policy decision still to come in less than an hour’s time: The Bank of England.

Since last night’s FOMC meeting, we have had two other major central bank rate decisions and some key data as well. But there is one last major central bank policy decision still to come in less than an hour’s time: The Bank of England. With the UK parliament’s vote on the EU withdrawal agreement not expected until January, you can almost rest assured that the BOE won’t be hiking rates today. So, don’t expect too much volatility in the pound. Boosted from the earlier retail sales data and dollar selling, the GBP/USD has now climbed back to the 1.27 handle ahead of the BoE.

Ahead of what could be a much quieter Christmas week, we now have one-and-a-half days left of normal trading this week. The much-anticipated Federal Reserve rate decision came to pass. As my colleague Matt Weller reported yesterday, the Fed was somewhat less dovish than expected but it still defied Donald Trump and hiked rates. The dollar initially jumped, and stocks slumped as the probability of a hike was around 70% and therefore not fully priced in. The Fed noted that “some further gradual increases” in interest rates are expected, but lowered its inflation and growth forecasts, while, according to the dot plots, the median policymaker now expects just two rate hikes in 2019, down from three at the September meeting. After the initial bounce, the dollar selling has since resumed and stocks have managed to come back slightly, although still held back by ongoing global growth concerns.

Meanwhile the Bank of Japan again opted for no change in its policy, while Sweden’s Riksbank hiked rates to -0.25% from -0.50%, sending the Swiss krona sharply higher. Earlier, New Zealand’s third quarter GDP estimate disappointed, printing 0.3% growth versus 0.6% expected, while Australian employment data beat as jobs rose by a good 37,000 versus 20,000 expected.

GBP/USD back to 1.27 handle, boosted by retail sales and dollar weakness

As mentioned, there was some good news for UK retailers: sales jumped by a much-larger-than-expected 1.4% month-over-month in November as shoppers took advantage of Black Friday sales. The pound liked the news, sending the cable back up to the 1.27 handle. It was boosted further by widespread dollar weakness.

Technically, the GBP/USD is still in a downtrend, but the selling pressure has waned, and I wouldn’t rule out the possibility for a sharp short-squeeze rally here given the extremely negative sentiment towards the pound at the moment. Also, the Brexit vote is several weeks away, so I don’t think there’s much urgency for speculators to suddenly ramp up the selling pressure. Still, we would prefer to have a stronger view on the cable once there is more clarity regarding Brexit. Technically, the short-term bias would only turn bullish upon a break above its most recent high at 1.2840. 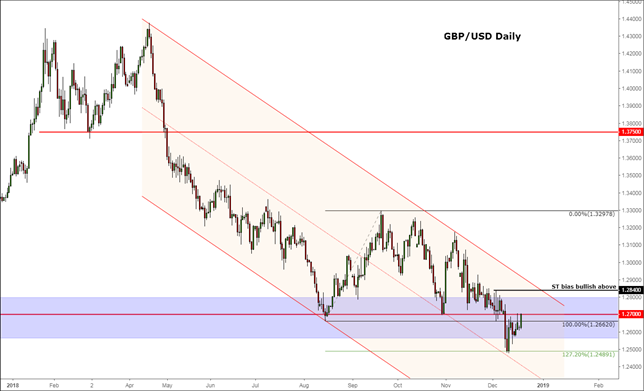