Earlier today, Raab noted that negotiators weren’t far from a deal and that the end was firmly in sight, but it was his comments in a letter to the Chairman of the UK Parliament’s Brexit Select Committee that were the real market mover. Raab stated that he “would be happy to give evidence to the Committee when a deal is finalized, and currently expect 21 November to be suitable.” While the deal could obviously still fall through, the inclusion of a specific date gives the statement more substance and has bolstered GBP bulls’ spirits.

Today’s developments come on the eve of tomorrow’s BOE meeting, though speaking bluntly, Brexit developments were always going to overshadow anything the BOE did this month. The central bank will almost certainly vote 9-0 to keep interest rates on hold after hiking them back in August. From an economic perspective, the UK economy is performing admirably despite the looming storm cloud of Brexit, with a 43-year low in unemployment push wages to rise 3.1%, the highest rate in nearly a decade.

Ahead of Raab’s announcement, traders were pricing in a 38% chance of another BOE rate hike in May 2019, and that figure has ticked up slightly to 44% as of writing. Like any competent central banker, BOE Governor Mark Carney is unlikely to limit the central bank’s options, so the meeting itself should be quickly digested by the market, with the focus quickly turning back to developments on the Brexit front.

Not surprisingly, cable caught a bid off the Raab headlines, with rates surging 60 pips in less than 10 minutes. That said, the market may have discounted some of the move with the rally through today’s European session (note that sterling was already the strongest major currency before Raab’s comments even hit the wires), so the move has lost a bit of steam over the last 30 minutes or so.

Moving forward, the inclusion of specific date for the expected completion of a deal represents a major development, so we wouldn’t be surprised to see GBP/USD continue its recovery. A bounce back toward the middle of the 4-month range in the 1.2900-1.3000 area could be in play as long as support in the 1.2660-1.2700 zone holds. 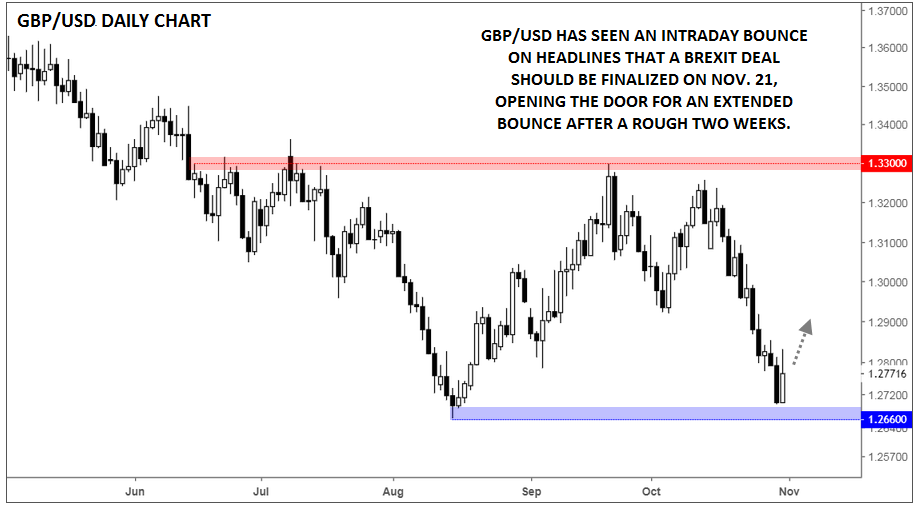