GBP/USD clings on but UK economy faces tough road ahead

This morning saw the GBP/USD bounce off its lows as the buyers stepped in to defend the 200-day average (1.2130ish) after a two-day decline. But the growing macro risks in the UK suggests this might prove to be a temporary bounce, while the dollar has also found renewed strength in recent trade.

In fact, the UK faces a period of mass disruption in December, which could not come at a worse time. Hundreds of thousands of workers across the country are going to strike across industries in disputes over pay, pensions, jobs and conditions. Among others, they include rail staff, bus drivers, nurses, civil servants and postal workers. Given that this is happening just weeks before Christmas, we could see a noticeable hit to an already weak economy.

With UK services and manufacturing PMIs remaining well in the contractionary territory of below 50.0, the industrial action is only going to weigh further on economic activity. The construction PMI also collapsed in November as we found out the day before, as it barely remained above the expansionary threshold. At 50.4, it came in well below 53.0 expected, falling noticeably from 53.2 in October. And today, there was more gloomy news, this time from the housing market. The Halifax House Price Index plunged a massive 2.3% m/m in November, causing the annual rate to dip to +4.7% from 8.2% previously.

Meanwhile, across the Atlantic, the US economy is holding its own relatively better. We have had a few hotter-than-expected US macro pointers in recent days, which have seen investors buy the dip in the dollar. The greenback had fallen further last week after Powell was less hawkish than expected. But now it has found decent support on the back of expectation that the stronger data may yet encourage the Fed to continue tightening interest rates so that it climbs above 5% before the cycle is paused.

Anyway, the cable is at risk of coming under renewed pressure and the trigger could be a daily close below the 200-day average. So, if that happens, then watch out below! 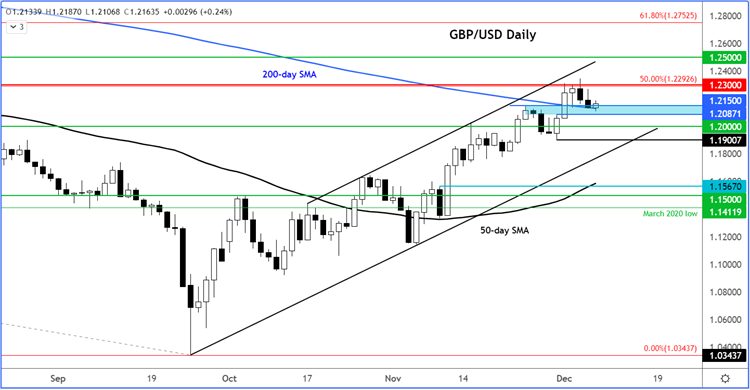