The UK economy scored a hat-trick of good news this week. The purchasing managers' indices (PMIs) for the key sectors all strengthened above forecasts in April. We had already seen this week that the manufacturing sector PMI had risen sharply to 57.3 from 54.2 previously and construction PMI to 53.1 from 52.2. The key question was how the dominant services sector performed amid the Brexit uncertainty and ahead of the general elections in June. Well, apparently, very well. The PMI came in at 55.8, up from 55.0 and above 54.6 expected. The pound recovered from earlier losses to hit the $1.29 handle again, where it was trading around at the time of this writing.

The UK economy scored a hat-trick of good news this week. The purchasing managers' indices (PMIs) for the key sectors all strengthened above forecasts in April. We had already seen this week that the manufacturing sector PMI had risen sharply to 57.3 from 54.2 previously and construction PMI to 53.1 from 52.2. The key question was how the dominant services sector performed amid the Brexit uncertainty and ahead of the general elections in June. Well, apparently, very well. The PMI came in at 55.8, up from 55.0 and above 54.6 expected. The pound recovered from earlier losses to hit the $1.29 handle again, where it was trading around at the time of this writing.

In the US, the economy is also doing well, and the slowdown during the March quarter was “transitory,” according to the Federal Reserve. The Fed said consumption growth was solid and inflation was running close to its target. Consequently, the prospects of an interest rate rise next month rose to about 90% from around 60% following the publication of the FOMC statement. Yet, the Dollar Index (DXY) has given up a big chunk of the gains from yesterday.

The DXY’s struggle is almost entirely due to the a firm euro, which has held its own very well ahead of the French election as market participants continue to expect a win for Macron rather than the far right candidate Le Pen. Also supporting the single currency is stronger data from the Eurozone. Today saw the German, Italian and Spanish services sector PMIs all come in ahead of expectations, while unemployment in Spain fell unexpectedly sharply by more than 129 thousand in April.

But with months of uncertainty facing the UK economy, we are doubtful if the cable would be able to hold its own at these levels for too long, especially when you consider the fact that the Fed has already started its rate hiking cycle, while the BoE is nowhere near. If Friday’s US jobs and wages data come out stronger than expectations this will only further boost the prospects of a June rate rise.

GBP/USD next domino to fall?

Consequently, the GBP/USD and possibly the EUR/USD could be the next big dominos to fall. The GBP/USD has struggled in recent days to stay above 1.2905, the high made on the day Theresa May announced news of the snap election. The cable has since continually ran into resistance around 1.2950 which is the base of the 1.2950-1.3000 zone – the last support area prior to the breakdown that eventually led to the flash crash. Once support, this area is now providing resistance. The cable now needs to break support at 1.2835 and ideally 1.2775 if we are to see the start of a potentially sharp drop towards the 200-day moving average and support at around 1.2595-1.2600 area.

Alternatively, a clean break above 1.30 handle would suggest that the bullish trend has further momentum left in. In this potential scenario, we wouldn’t be surprised if the cable were to eventually climb all the way to 1.3335-1.3445 area next. 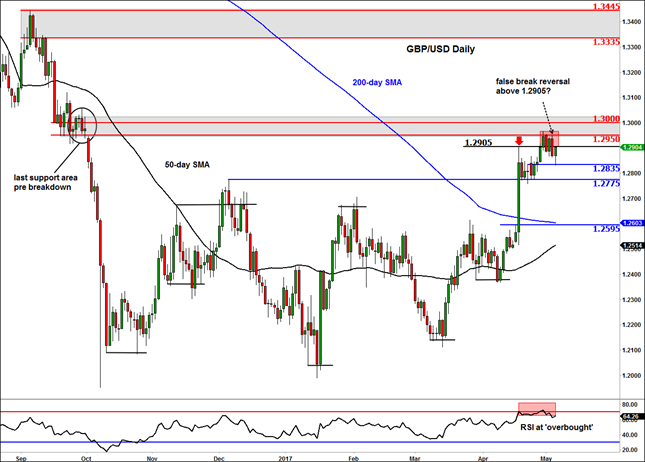