According to the ONS, the Consumer Price Index (CPI) measure of inflation was unchanged on both the headline and core fronts last month. At 2.6 and 2.4 per cent year-over-year respectively, they missed expectations for a small rise to 2.7 and 2.5 per cent.

The pound has been largely out of favour ever since the Bank of England's last policy meeting a couple of weeks ago, where only two Monetary Policy Committee members voted for a rate rise. Given the recent rise in inflation and the general improvement in the UK economy, the markets were surprised by the BoE's dovishness. But today's release of the latest inflation data for the month of July underscores the BoE's cautious approach. According to the ONS, the Consumer Price Index (CPI) measure of inflation was unchanged on both the headline and core fronts last month. At 2.6 and 2.4 per cent year-over-year respectively, they missed expectations for a small rise to 2.7 and 2.5 per cent. Other measures of inflation were somewhat stronger. For example, the Retail Price Index (RPI) unexpectedly rose to 3.6 from 3.5 per cent and the House Price Index (HPI) came in above expectations at 4.9% y/y. Nonetheless, the pound's immediate reaction was a swift drop: the GBP/USD fell below the 1.2950 level to hit 1.2910 while the EUR/GBP climbed to 0.9100. The slightly weaker pound gave a small boost to the FTSE, which rose towards this morning’s session highs.

The GBP/USD will remain in focus tomorrow as we will have UK wages and employment figures as well as US housing market data in the form of building permits and housing starts, and the FOMC’s last meeting minutes. Thus, there is the potential for some sharp moves in the GBP/USD pair. As far as the UK economy is concerned, the growth in wages has been slower than that of inflation in recent months, causing real incomes to fall. Any narrowing in the gap will be welcome. But analysts are not too optimistic. The consensus forecasts call for the average earnings index to have remained unchanged at 1.8% in the three months to June, compared to the same period a year ago. The Claimant Count is seen rising by 7200 applications after the 6000 increase the month before.

US retail sales could move the dollar

But the market’s immediate focus will be on the US where retail sales, Empire State Manufacturing Index and a few other macro pointers will come in later on today. Both headline and core retail sales are expected to have risen 0.3% in July after their respective 0.2% decline the month before. The New York Manufacturing Index is expected to have risen slightly to 10.1 from 9.8 previously. Today’s other US data releases include Import Prices, Business Inventories, TIC Long-Term Purchases and NAHB Housing Market Index. Any further deterioration in US data may undo the small rebound we have seen in the dollar. However given the current negative sentiment towards the US economy, if we see surprisingly strong figures from the States then the dollar could make a more meaningful comeback – especially against the pound given today’s softer than expected UK CPI data.

From a technical perspective, the GBP/USD’s struggle and the subsequent failure to hold above the psychological 1.30 handle is bearish. It faces resistance in the 1.2940-1.2955 area which as previously support. A break above this region on a daily closing basis would be bullish again, ideally if the last high at 1.3030 is also taken out. Unless that happens, we may see further weakness going forward. A couple of support levels to watch include 1.2905 and then all the way down at 1.2760, levels which had been resistance in the past. There’s also a trend line which may offer some support at 1.2860/70 area. In short, the technical outlook looks more bearish than bullish as things stand. 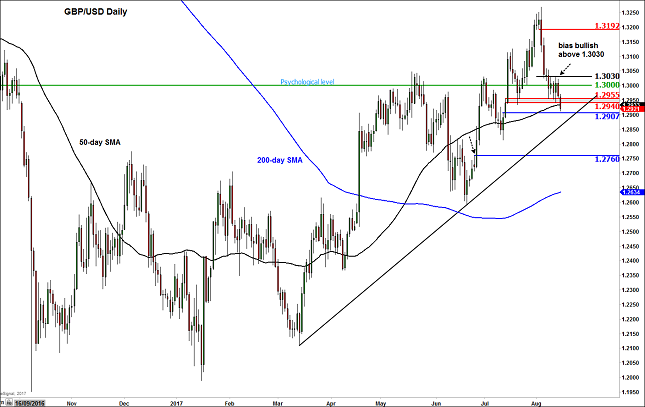