Midway through this morning’s US session, Chief EU Negotiator Michel Barnier stated that Europe is “prepared to offer Britain partnership unlike with any other country.” While short on details, this statement could well mark a turning point from the adversarial nature of the negotiations up to now. For his part, UK Brexit Secretary Dominic Raab expressed confidence that a deal was “within our sights,” a sharp improvement from peak “hard Brexit” fears a few weeks ago. With recent headlines suggesting that the window for negotiations could stretch into November, there’s still plenty of issue to hammer out, but both sides appear invested in reaching a mutually agreeable outcome.

Cable is tacking on over 50 pips in the wake of Barnier’s comments to hit 1.3000, its highest level in over three weeks. Though some short-term trend indicators are starting to improve, bulls face a heavy test from the bearish trend line off the May highs, which has capped rates on four separate occasions over the last couple of months. A definitive break above that level, if seen, could expose the late July swing high near 1.3200. Meanwhile, a reversal off that bearish trend line would hint at a move back down to retest the near-term bullish trend line or last week’s support near 1.2800. 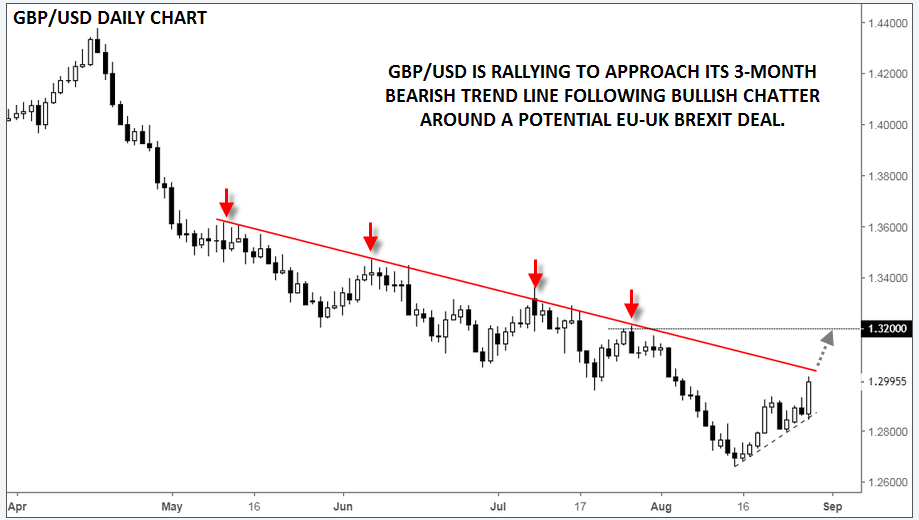