The GBP/USD has remained largely supported after the Bank of England’s policy decision on Thursday. The BoE decided to keep interest rates unchanged last week but the meeting was nonetheless seen as being hawkish since three MPC members voted for a rate hike rather than just the two expected.

The GBP/USD has remained largely supported after the Bank of England’s policy decision on Thursday. The BoE decided to keep interest rates unchanged last week but the meeting was nonetheless seen as being hawkish since three MPC members voted for a rate hike rather than just the two expected. The pound rallied sharply on that day and it eked out a gain on Friday even if it closed off its best levels. At the start of the new week, the cable is finding itself higher again. There isn’t a lot on the agenda in terms of economic data to cause a major move this week. Thus, the GBP/USD may continue drifting higher now that the BoE is out of the way. Meanwhile the Federal Reserve had already decided to deliver a hawkish rate hike a couple of weeks ago. But the fact that the dollar has stopped going higher despite this, also points to a potential recovery for the GBP/USD exchange rate.

As a result of the BoE’s hawkish move last week, the GBP/USD carved out a doji candle on its weekly chart after briefly probing liquidity below the prior low at around the 1.3200/05 level. The fact that there was no follow-through on the downside, this was technically bullish. Obviously the fundamentals played a big part here. But from a purely technical analysis point of view, the cable may have created a false break reversal pattern. This view is supported further by the fact the cable created a large bullish engulfing candle on its daily chart on Thursday. However, the bulls will still require further evidence that a short-term low is now in place. Specifically, they require a higher high to be formed above the most recent high at 1.3470. If this were to happen then the technical bias would turn decisively bullish. For now, we merely have tentative bullish signs. 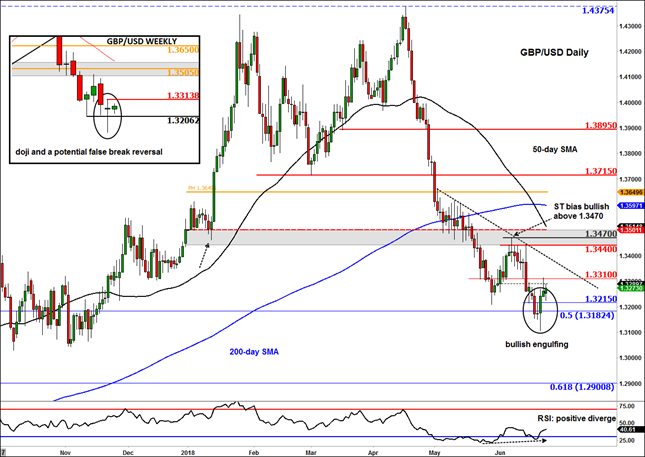