…time for a reality check?

…time for a reality check?

The GBP/USD has stormed higher in recent weeks thanks to a combo of weak US dollar and firmer sentiment across the financial markets. But after a 19% rally from its record low, is it time for a reality check? The cable has also now recovered about 50% of its entire decline from its 2021 high. That’s impressive. But the weak UK macro picture and potential for a rebound in USD both suggest the upside potential is going to be limited from here. That said, the bears will need a confirmed reversal signal first, given the sheer size of the rally – and momentum. 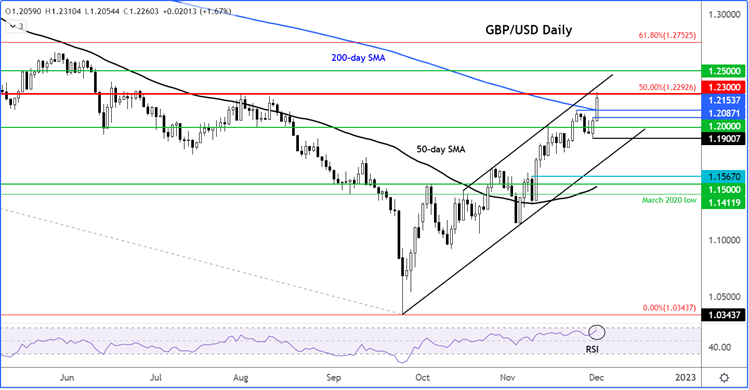 As price action has been quite bullish, conservative traders will need to see a reversal pattern form before potentially looking for short setups. Let’s see if it will form a double top around 1.23 handle, which was also the high in August. If a double top or another reversal pattern is formed there, we will still need to see a lower low for confirmation. The most recent low is at 1.1900. So, that’s the level to watch for a breakdown before we tactically turn bearish towards 1.15ish.

There are a couple of support levels to keep a close eye on in the interim. Among others, we have the 200-day average at around 1.2150/55, which was also the high from last week. Wednesday’s high comes in around 1.2087.

While the dollar has fallen sharply since Powell spoke, and it hasn’t yet bottomed out, we think that the downside should be limited for the greenback. After all, the Fed Chair’s comments were not too dissimilar to what most of his FOMC colleagues have been saying recently. You would have thought that the market may have priced in a 50-basis point rate hike for December by now given the generally less hawkish comments from many Fed officials, and CPI and a few other inflation pointers to back that. Perhaps the markets were not expecting the Fed Chair to explicitly imply that the FOMC will indeed hike by 50bps in December, a slowdown and thus a pivot from the recent 75bps hikes. Powell also said that the Fed doesn’t “want to overtighten, which is why we are slowing down,” but ruled out cutting rates soon.

Additionally, Powell did say something very interesting, which was completely ignore: “Given our progress in tightening policy, the timing of that moderation is far less significant than the questions of how much further we will need to raise rates to control inflation, and the length of time it will be necessary to hold policy at a restrictive level.”

He added that the Fed is aiming for “significantly positive real rates,” before a pause. So, don’t be surprised if the dollar rises back from the ashes.