GBP/USD still not out of the woods

GBP/USD's rebound comes after a sharp drop at the end of last week, which ensured of its third down close in as many weeks. Thus, at this stage, one has to take this latest rebound with a pinch of salt, as it could be a counter trend move which could ultimately fail to sustain itself.

The pound has stormed back to life at the start of this week, rising from a low of 1.3030 to a high so far of 1.3200 against the dollar. Its rebound comes after a sharp drop at the end of last week, which ensured of GBP/USD’s third down close in as many weeks. Thus, at this stage, one has to take this latest rebound with a pinch of salt, as it could be a counter trend move which could ultimately fail to sustain itself.

The pounds’ move has been supported by positive UK data, which has again boosted expectations for a rate increase from the Bank of England. On Monday, a surprise revision to UK’s second quarter labour unit costs to 2.4% from 1.6% year-over-year by the ONS triggered a rally in the pound as it boosted the probability of a November Bank of England rate hike to 78%. Sentiment was lifted further this morning by UK data showing a better-than-expected 0.4% month-over-month rise in industrial production and a 0.6% increase in construction output in August.

There are no more UK economic data scheduled for release this week, so any further data-driven moves in the cable may be prompted by US data, with CPI and retail sales on Friday being the most obvious trigger. But there will also be a few speeches from Fed officials throughout the week to look forward to, while the FOMC’s last meeting minutes are due for publication on Wednesday. So we could see a sharper move in the dollar in the second half of the week, which could undermine the cable again.

From a purely technical outlook, this week’s rebound in the pound has lifted the GBP/USD to test key resistance in the range between 1.3200 and 1.3250. This area had been an inflection point in price previously. Thus, now that price has broken below here, it could offer resistance. Only a potential break back above 1.3250 would be deemed bullish at this stage. Even then, the cable would face additional resistance at 1.3350, which may cap the potential gains anyway. In terms of support, 1.3140 was Monday’s closing price, which makes it an important level to watch. Below this level, 1.3030 would be the next key level as this was previously support and mark’s this week’s low. Below here, 1.2965 would be the line in the sand for me. Not only was this a previous (and untested) resistance level, but a bullish trend line also cuts through here. So, any decisive move below this level could potentially trigger a much larger correction.

So, in a nutshell, I am not confident at this stage that the low for the GBP/USD has been formed. We either need to see the breakdown of some key resistance levels now, or the formation of a distinct bullish reversal pattern around the lower support levels. Otherwise, we may be in the middle of a correction phase, with this week’s bounce merely being a countertrend move. 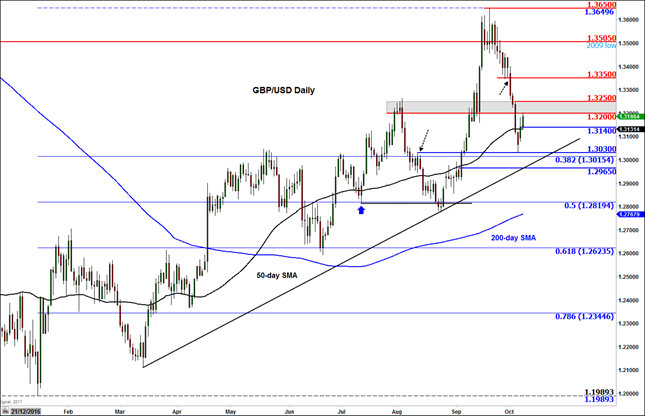