GBP/USD Tags a Nearly 1-Year Low – What Next?

First, traders will get an update on a broad swath of the economy through the UK GDP and Manufacturing Production reports at 8:30 GMT. The UK economy is projected to have grown at a 0.2% rate month-over-month in June and a 0.4% rate quarter-over-quarter in Q2. Then, cable traders will turn their eyes toward the US CPI report, which economists expect will show 0.2% growth month-over-month for both the headline and core readings.

As we saw yesterday though, the ongoing Brexit drama is the most important factor driving trade in the pound at present. This weekend’s headlines that UK government officials were more open to a no-deal / “hard” Brexit drove GBP/USD to a nearly 1-year low.

Looking at the chart below, the pair remains solidly within its 3-month bearish channel, with room to fall further before reaching the bottom. Short-term, the market will retain a bearish bias as long as rates are holding below July’s low at 1.2960, and even a recovery back above that level could still run into overhead supply from the top of the channel just above 1.3100. With little in the way of long-term support until the around 1.2850 (the 61.8% Fibonacci retracement of the entire post-Brexit-vote rally), the path of least resistance remains to the downside for now. 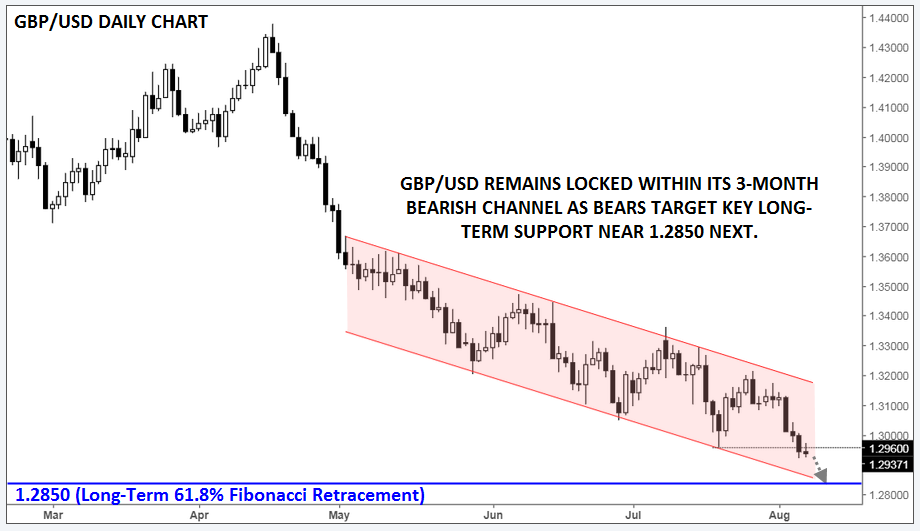