The pound tumbled at the Asian open and has remained weak during the early part of the European session today.

The pound tumbled at the Asian open and has remained weak during the early part of the European session today. The trigger behind the latest drop in sterling seems to have been on two reports: (1) that Theresa May, UK Prime Minister, could trigger Article 50 as early as mid-March and (2) that Nicola Sturgeon, Scotland’s first minister, could call another vote on Scottish independence in March and that the UK government is apparently preparing itself for that possibility. Whether or not another Scottish referendum will actually happen remains to be seen. But the concerns will be there, which along with uncertainty about the timing and process of UK’s exit from the EU should keep the pound under pressure for the time being. Consequently, any potential gains in the short term should continue to be taken with a pinch of salt – even if they come on the back of positive UK economic data. That being said, I do think that most of the negativity may have already been priced in. Thus, what I am expecting to see in the coming weeks is further consolidation around these current levels until there is clarity on the issues of Brexit and Scotexit. However consolidations can happen in wide ranges, and this week could be a volatile one given the sheer amount of upcoming economic data from both the UK and US, as well as the small matter of US President Donald Trump’s address to Congress on Tuesday. In fact, it is Trump that poses the immediate risk to the GBP/USD rather than Brexit talks. Although the cable is weak at the time of this writing, it could very easily bounce back as speculators reduce their long exposures to the dollar ahead of Trump’s speech.

Trump and Yellen will sandwich key data from UK and US

This week, there will be plenty of data to keep GBP/USD traders busy – both from the UK and US. From the UK, we will have the Manufacturing PMI and lending data on Wednesday, followed by the Construction PMI a day later and then the key Services sector PMI on Friday. As we are getting closer to the time when the Brexit Article 50 will be triggered, businesses may exercise more caution and this may well be reflected in falling PMI numbers. Thus, any surprisingly strong readings may very well underpin the pound. Meanwhile from the US, there will be lots of data to look forward to this week, starting with durable goods orders and pending home sales today. The second estimate of US GDP will be published on Tuesday, as will the Chicago PMI and CB’s consumer confidence index. President Trump’s much-anticipated speech will also take place Tuesday evening, so there is potential for a big move in the financial markets then. On Wednesday, we will have data on personal spending, the ISM Manufacturing PMI and what is rumoured to be the Fed’s favourite measure of inflation: the Core PCE Price Index. The ISM’s Non-Manufacturing PMI will be released on Friday. In addition to all this, there will be speeches from several Fed officials throughout this week, including Chair Janet Yellen on Friday. So, there’s lots to look forward to!

From a technical perspective, the GBP/USD’s ranges are contracting which means a period of expanding ranges is forthcoming – potentially after the UK government triggers Article 50 in March. Indeed, after that volatile move from around the 1.20 handle in the middle of January, the weekly candles have been shrinking in size as there was no real follow-through in the buying momentum. This indecisive price action has therefore reduced our conviction behind our once bullish view that the cable had formed a double bottom reversal formation at 1.20. While this could still be the case, we will now need to see further bullish price action to fully reinstate our view. That being said, price action has not been exactly bearish either. Granted, the lack of any significant bullish follow-through means some traders have been sitting on the offer in recent weeks. But crucially, they haven’t been able to push the GBP/USD down below the pivotal 1.2400 level again in a meaningful way. So far, the 50-day moving average and support around 1.2385 has repeatedly held. Only a move below this level on a daily closing basis would be bearish in the short-term outlook. But it remains to be seen if that will happen today given that the cable was already down some 80 pips off the overnight high at the time of writing. Thus, there is a possibility it could bounce back in the second half of today’s session as the sellers take profit. This may help to create a bullish-looking daily candlestick formation such as a hammer, which could then attract the technically-minded buyers’ attention on Tuesday.  Conversely, a close near the daily low could help encourage bearish speculators to express their views in a meaningful way on Tuesday. Some potential support and resistance levels are shown on the charts in blue and red respectively. 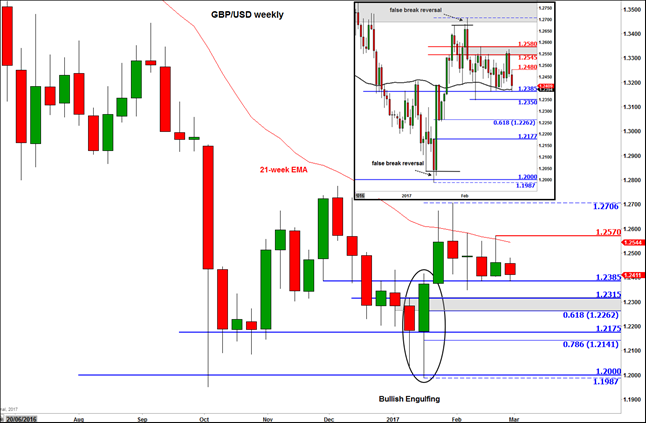