GBP/USD: Will the BOE hint at an August hike?

Markets have calmed down since yesterday’s big risk asset selloff, but that doesn’t mean that there’s nothing exciting on the horizon for traders.

Markets have calmed down since yesterday’s big risk asset selloff, but that doesn’t mean that there’s nothing exciting on the horizon for traders. Namely, tomorrow’s BOE meeting should provide some important insights into Mark Carney and company see policy unfolding moving forward.

At its last meeting, the Bank of England voted 7-2 to leave interest rates unchanged at 0.5% and cut its inflation forecasts for the next three years. This dovish revision to the economic outlook prompted traders to sell pounds as they considered the possibility that the central bank may not even raise interest rates at all this year.

Heading into this week’s meeting, expectations are that little has changed, but as we all know, Mark Carney’s “unreliable boyfriend” nickname is well-earned given his tendency to frequently revise his views and surprise markets.

While it’s highly unlikely that we see the central bank raise interest rates at this meeting, it could use tomorrow’s statement and press conference to prepare traders for a rate hike in its August meeting. For instance, if another BOE member (Haldane?) dissents in favor of a rate hike, it would bring balance of the MPC closer to even between hawks and doves/centrists. Traders will also key in on how the committee views the recent tick lower in inflation (to 2.4%) relative to the near-identical rate of wage growth (2.5%)

Of course, the big question mark when it comes to the BOE (and really anything related to the UK economy) is Brexit. With Article 50 talks outlining the structure of Brexit set to conclude in October, will the BOE try to “squeeze in” a rate hike before Brexit eclipses all other considerations? For what it’s worth, futures markets have priced in a 46% chance of interest rate increase in the BOE’s August meeting, and any changes to that number could have a significant impact on pound sterling.

Turning our attention to GBP/USD, cable has been in an established downtrend since peaking near 1.4400 back in mid-April. After a brief countertrend bounce off 1.3200, rates have rolled over once again to hit a fresh 7-month low below that level ahead of tomorrow’s BOE meeting. If Carney and company strike a more hawkish tone, GBP/USD could see a relief rally back toward 1.3300 or even 1.3400 as traders fear a “false break” below 1.3200. Conversely, a steady-as-she-goes statement the throws cold water on the prospect of a hike in August would likely take GBP/USD to a new year-to-date low around the psychologically-significant 1.3000 level. 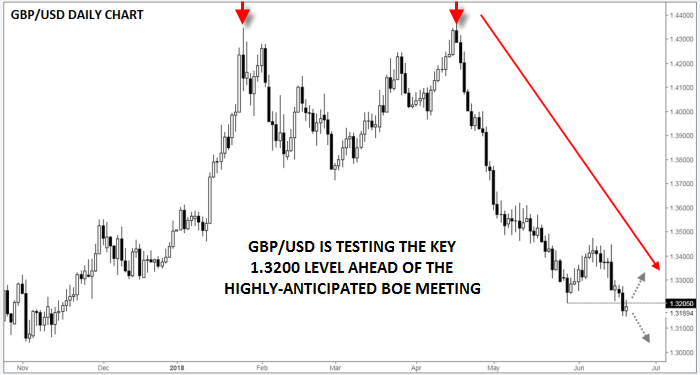