Gold and Silver running into resistance. Time for a correction?

To steal a quote from Christine Lagarde, markets this week seem to have been focused in 3 things: “Inflation, Inflation, and Inflation”.  US PPI was unchanged at 8.6% YoY , still excessively high.  US CPI was released a day later and came in blistering at a YoY rate of 6.2%, its highest level in 30 years!  In addition, the preliminary Michigan Consumer Sentiment figure for November was worse than October at 66.8 vs 71.7 last, primarily due to rising inflation and that consumers no feel that there have been efforts to contain it. The 1-year inflation outlook was 4.9% vs 4.7% in October.  Remember:  The Fed’s target inflation rate is 2%!  Therefore, 1-year inflation expectations are much higher than the Fed would like!

Precious metals, especially Gold (XAU/USD), are often viewed as inflation hedges.  Therefore, when inflation is rising, funds tend to flow to these assets.  Gold has been moving higher since November 4th, rising 6 straight days in a row into Friday.  The precious metal took out a key level at horizontal resistance above the 38.2% Fibonacci retracement level from the all-time highs in August 2020 to the strong support at 1678.88 lows, at 1831.09.  Gold also moved above horizontal resistance at 1853.55.  However, the metal has been held under resistance for the last 3 days at a downward sloping trendline dating back to September 1st (red).  In addition, the RSI has just moved into overbought territory at 70.64, indicating a pullback in possible.

Silver (XAU/USD) has been trading in a similar pattern since forming a hammer candlestick on November 3rd.  The precious metal has been moving higher, taking out horizontal resistance at 24.87 and pausing at the 200 Day Moving Average, near 25.35. Horizontal resistance is just above at 25.35.  Above there is a confluence of resistance at a long-term upward sloping trendline dating back to the September 24th, 2020 lows and a downward sloping trendline (red) from the meme highs on February 21st, near 26.50.  If price pulls back, support is at the previous highs of 24.87, horizontal support at 24.09, and the 50 Day Moving Average at 23.44. 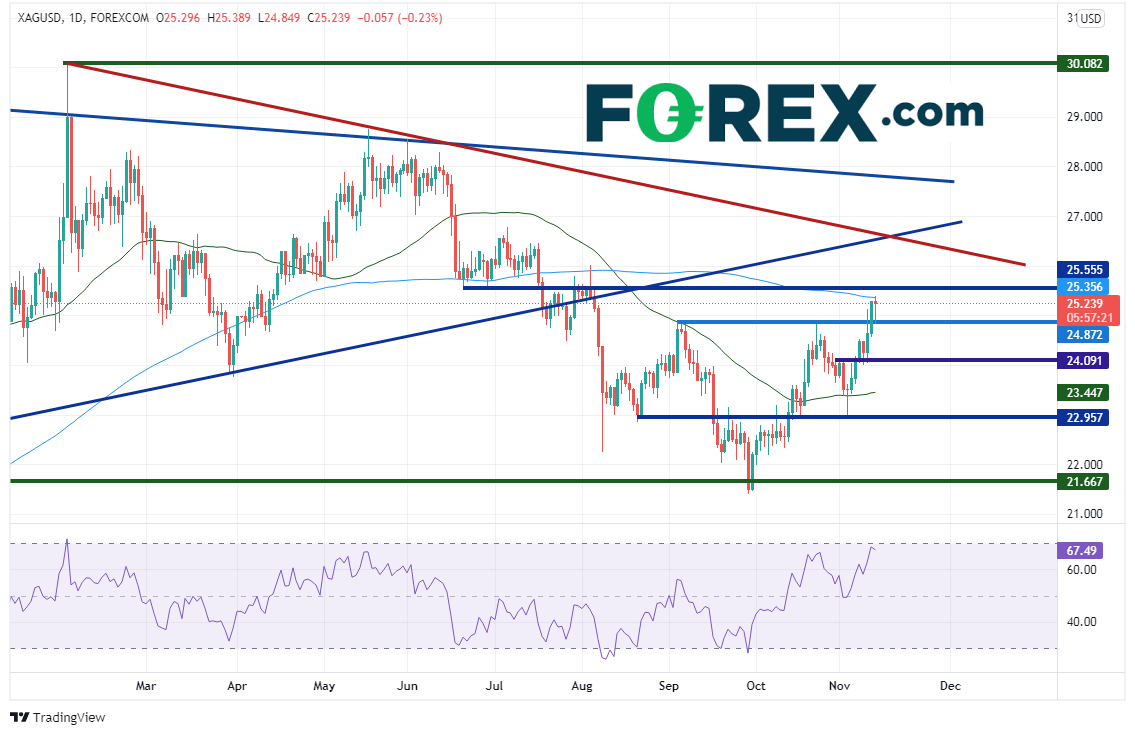