Gold could break higher if US and China strike trade deal

If a trade deal were to be reached, our assumption is that import duties will be lowered again which should push down import costs and therefore be disinflationary.

Gold has been a little quite over the past week and a half or so. Last week’s entire range was under $12, as it traded between $1218 and $1230. The precious metal is yet to break outside of this range so far this week. After a positive start yesterday, the metal ended lower as the dollar rose again while yields rebounded. It has started today’s session on the front foot again, but let’s see how it will behave later when US traders come to their desks. This morning’s rebound was partially driven on hopes for a rebound in demand from China, on the back of headlines from Chinese press that Presidents of the US and China, Donald Trump and Xi, had agreed to reach mutually beneficial agreements. However, this was apparently a reference to their November 1 phone call rather than anything new. Still, the recent falls in the stock markets suggest the pressure is growing on both the US and China to sort out their differences and agree on a trade deal. Also, question marks have risen over the Fed’s aggressive rate hiking outlook, which further boosts the prospects of a rally in gold. So, if a trade deal were to be reached, our assumption is that import duties will be lowered again which should push down import costs and therefore be disinflationary. That in turn should further reduce the urgency from the Fed to hike rates, and lead to a rally in bond prices and a drop in yields and the dollar. As a result, gold should react positively – especially if stock markets and the economy continue to remain under pressure.

Gold outperforms pound and euro but remains below key resistance

The fact that gold has managed to remain largely bid since hitting a low of $1160 since mid-August even though the Dollar Index has meanwhile pushed higher goes to show that the precious metal has outperformed some currency pairs. In part, this has been due to the fact that both the GBP/USD and EUR/USD have been undermined by ongoing political and economic uncertainties in Europe, while the recent stock market sell-off has meanwhile boosted the appeal of gold as a safe haven asset. That being said, gold is still contained within its existing wide range. So, despite its outperformance and small rebound over the past few months, we haven’t seen any significantly bullish developments yet. Indeed, there is a risk that the metal could be in for a sizeable drop should support at $1220 gives way, in which case at least a return to the next support at $1205 would then become likely. Key resistance, meanwhile, comes in around the $1240 area and for as long as it remains below this hurdle, the path of least resistance would be to the downside. But given the above fundamental considerations, could gold finally break higher anyway? 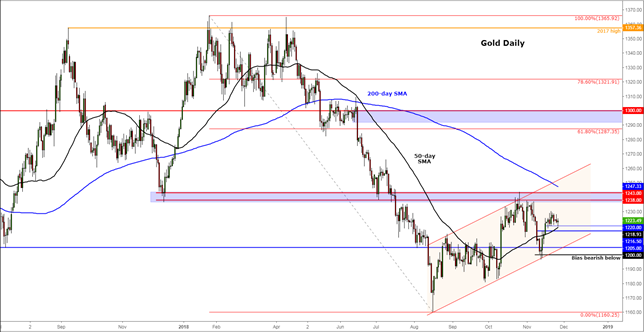