Gold could rebound amid elevated risks

Understandably it has been a rather quiet day in the markets with North Americans out celebrating Labor Day. But with the summer holidays over, volatility should pick up from now on. In fact, this week promises to be a busy one in terms of macro events.

Understandably it has been a rather quiet day in the markets with North Americans out celebrating Labor Day. But with the summer holidays over, volatility should pick up from now on. In fact, this week promises to be a busy one in terms of macro events. We will have monetary policy decisions from the Reserve Bank of Australia (Tuesday) and Bank of Canada (Thursday) and important data releases too – these include Aussie GDP and UK Services PMI (both on Wednesday), as well as monthly jobs reports from both the US and Canada (Friday). What’s more, there’s ongoing trade concerns, Brexit uncertainty and emerging market currency crisis to keep traders busy. With so much going on, it is not unimaginable for safe haven assets such as gold, yen and Swiss franc to find demand.

Despite the emerging market currency crisis, trade war concerns and Brexit uncertainty, safe haven gold has so far been reluctant to move higher. In large part, this is because of the dollar’s strength, which has weighed heavily on all buck-denominated metals. But even against the pound and the euro, the precious metal has not enjoyed much success either. However, with September historically not being the best month for US equities, and given the abovementioned risks, there could well be a sharp rise in risk aversion to watch out for in the coming weeks. Consequently, safe haven gold could stage a comeback, especially if the dollar were to weaken as well. A potential move back above $1215 resistance could spark technical buying in gold, while a break of $1184 support would signal resumption of the bearish trend.

USD/CAD jumps as Trump threatens to exclude Canada from NAFTA

For now, though, the dollar is clinging onto its bullish trend and has done particularly well against commodity and emerging market currencies. The latest commodity currency to tumble is the Canadian dollar.  The USD/CAD rose sharply to 1.3100 after the US failed to reach an agreement with Canada, with US President Donald Trump threatening to exclude its northern neighbour from a new NAFTA agreement. Trump said in a tweet that “there is no political necessity to keep Canada in the new Nafta deal. If we don’t make a fair deal for the US after decades of abuse, Canada will be out.”

In the UK, last week’s optimism over a Brexit deal has faded fast. This comes after the EU’s chief Brexit negotiator Michel Barnier said he strongly opposes parts of Prime Minister Theresa May’s proposal for a Brexit deal. But May has insisted that she would not “be pushed into accepting compromises on the Chequers proposals that are not in our national interest”. To make matters worse, David Davis – the former Brexit secretary – has promised to vote against Mrs May’s Brexit plan. Mr Davis has called the Chequers proposal “worse than the [UK’s] existing deal” inside the EU. The pound responded to these developments over the weekend by gapping lower. And it fell further on news Britain’s manufacturing sector PMI dropped last month to its lowest level in more than two years, becoming hitting support around $1.2855.

In EM space, Turkey’s central bank said its “monetary stance will be adjusted” at its policy meeting later on in the month after new data showed a sharp jump in domestic inflation. The lira has remained under heavy pressure despite the government’s recent efforts with USD/TRY trading around 6.64 – not far off its most recent record high of about 7.02. Meanwhile the Argentine peso, which last week lost a big chunk of its value and dropped to a fresh record low, was again coming under pressure amid growing concerns over the country's deficit. This is despite the fact Argentina’s economy minister unveiling plans to get rid of the country’s fiscal deficit by next year by charging higher export taxes. 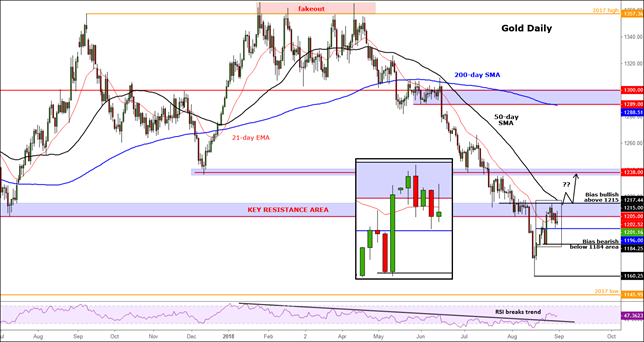